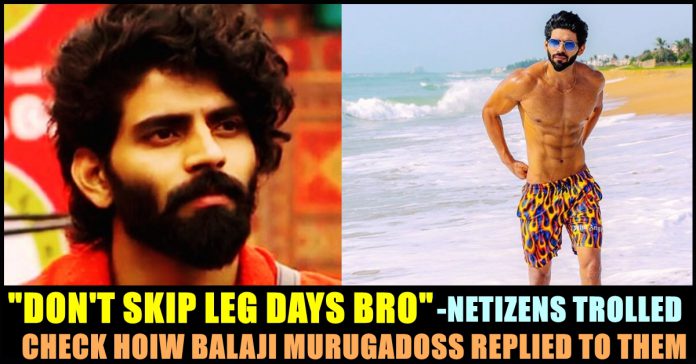 Balaji Murugadoss of Bigg Boss fame is pretty much active in social media platforms ever since coming out of the 100 days competition. He ended up as a runner up of the Kamal Haasan hosting show and gained a separate fan base for himself through his looks, charm and activities. The aspiring actor conducted a question and answer session with his Instagram followers recently and answered to many of their questions including to the one who asked him about when his marriage is going to take place.

The 24 year old received 6 crore votes from the viewers of the Bigg Boss show show, said Kamal Haasan during the finals. Having 8 lakh plus followers in the photo posting social media site, Balaji, in a recent question and answer session, disclosed about a lot to his fans and followers. To the one who asked when he is going to get married, the body builder said “Everyone asking this, I feel like completing college just now. Not gonna think about for years”

To another one who asked whether he would drink beer, Balaji Murugadoss added a picture of himself with an alcohol bottle and said “Strictly no beer”

A follower asked whether Balaji would go into the Bigg Boss house again and he replied with a video of Superstar Rajinikanth and denoted that he got fed up with the paid reviewers and PR teams.

He also opened about how he managed to stay fit even during his Bigg Boss stint, while replying to one of his followers.

Balaji is known for uploading pictures of himself working out at Gym and for uploading the pictures of his muscular physique. On seeing his recent posts, many seemed to have texted him saying “Don’t skip leg day bro”. The phrase is widely used in Internet to troll men whose leg would look inappropriate to their muscular body, most probably due to skipping leg days during their work outs.

Reacting to those who trolled him by using the phrase, Balaji uploaded a video of a glimpse of his legs and said “For the “don’t skip leg days” bros”

Here[‘s the screen shot of his story :

Check out some of the recent posts of Balaji below :

Who Was The Mystery Woman Accompanied Abhinandan Through The Border ?? Check Out The Full Details Here

There was happiness and cheer across the county after Air Force pilot Abhinandan Varthaman was released by Pakistan today. Prime Minister Narendra Modi and...