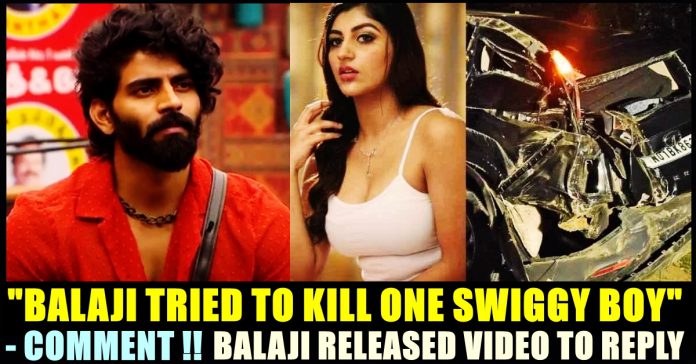 Bigg Boss fame Balaji Murugadoss cleared air on the long time controversy that said that he was involved in a car accident with Yashika. The aspiring actor conducted a live session through his official Instagram handle and interacted with his followers to give a clarification about the issue. He appeared in live, days after actress Yashika was admitted in hospital after meeting with a road accident due to speeding.

Popular film and television actress Yashika Anand was in critical condition after meeting with an accident that took place in the midnight on East Coast Road near Mahabalipuram. The actress’s’ friend named Valli Chetti Pavani who travelled with her died on the spot. The car, reportedly swerved from its path and struck the median strip and the images of the damaged vehicle were doing rounds in social media platforms.

Bhavani suffered severe head injuries and her body was sent to postmortem to the Chengalpet government hospital. The Mamallapuram police have registered a case and are investigating. Cases for rash driving and causing death due to negligence were registered against actress Yashika. It is very well known that Balaji and Yashika are friends with each other prior their respective Bigg Boss stints. Earlier, reports surfaced saying that Balaji Murugadoss caused an accident while driving a car after consuming alcohol.

It was said that Balaji and his friend rammed their luxurious car into a food delivery boy and called Yashika for help when Police caught them. Now, opening on the issue, Balaji said “They say that she committed an accident with me which is completely not true. There are so many people who see me as a role model. If they happen to see the baseless comments and videos about me driving car after consuming alcohol. I have zero black remark against me about driving. It’s been six years since I got my driving license” Balaji said in the video.

“I never dropped my KTM RC 200 bike and always drive it within a speed limit of 50, 60 kms per hour” Balaji said and went on to slam the Bigg Boss reviewers who spread such news. “I hope you are all have ethics and morals” he added. “The reason behind this live is due to a comment on a post which said that I tried to kill a Swiggy guy.” he further said.

“My intention is not to prove myself but I don’t want my followers to take it as a bad example” said Balaji and expressed his displeasure over the people who spread such news. Watch the video below :

Previous articleBJPians Spewed Hatred At G.V Prakash For Prioritizing Language Over Country !!
Next article“Why Should I Stay A Whole Night There ??” Sunitha Of Vijay TV Fame Lashed Out !! WATCH

A four-and-a-half-minute promo song from Nayanthara’s upcoming film, Kolamavu Kokila, was released on Sunday. The makers have also confirmed the release date of the film as August 17 towards the...