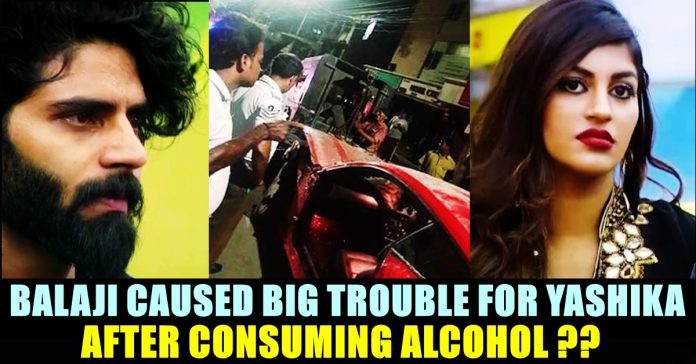 On the weekend episode of Bigg Boss show, Ulaganayagan Kamal Haasan advised bodybuilder cum model Balaji Murugadoss not to defame someone’s achievement after he made a derogatory comment on the beauty competition Sanam Shetty won. Kamal said that he himself would feel bad if someone says bad about the industry through which he gained so many awards and recognitions. “Won’t you feel bad if someone says that you built your body by using injections ?? They said that to me when I worked hard on my physique for Aalavanthan. I got extremely hurt by such comments at that time” Kamal advised Balaji Murugadoss.

Balaji said that he has suffered severe physical abuse by his father in childhood. He said that his father who is an alcoholic, used to beat him up with the tube used on LPG gas cylinders when he was sleeping. “I would feel sudden pain in the head. Would run here and there with pain. Only after seeing my dad with the gas tube, I realized that he has beaten me.” Balaji said in the episode who added that his Mother also involved in abusing him physically after consuming alcohol.

This particular episode gained him enough followers to support him. Meanwhile, a number of followers went on to search his history in social media and came up with a Tik Tok video which showed him bathing in beer. They started criticizing him saying that the model who blamed his parents for having alcoholic issues, seems to have the same. Read : Balaji Murugadoss’s “Beer-Bath” Video Received Severe Criticism From Netizens!!

Now, another controversy surfaced linking him up with the consumption of alcohol. Joe Michael, an event coordinator who is known for his confrontation with former Bigg Boss contestant Meera Mitun, has came up with an accusation against Balaji Murugadoss. Joe who condemned Balaji for making ill statement against his firm, said that he is a close friend of Yashika Anand, popular actress and former Bigg Boss contestant.

Joe referred an incident where Yashika Anand hit out at media for making false allegation against her in an accident case, made it sure that the accident was caused by Balaji Murugadoss who was drunk at that time. He said that Balaji and his friend rammed their luxury car into a food delivery boy and called Yashika for help when Police caught them.

“Yes, as he said his parents didn’t raise him well. If they raised him well, he wouldn’t have rammed his car into a food delivery boy in an alcoholic state. The incident was happened around 1 : 00 AM on 6th of October in 2019 at Nungambakkam. After finishing the party, Yashika and her friend left the place. After ramming the car, Balaji and his friend called Yashika for help which was wrongly portrayed in media as the crime was committed by Yashika” said Joel Michael in the interaction with Indiaglitz.

Joe Michael also said that he is going to issue a legal notice against Balaji for defaming his company. At that time, when Yashika was falsely accused of causing the accident, the actress posted a series of stories in her Instagram account, slamming the media reporters who made false accusations against her.

Check out the screenshots of the Instagram stories Yashika uploaded at that time :

Comment your views on these accusations of Joel Michael against Balaji !!

Previous article“They Think They Can Say Whatever They Want” Madhavan Got Emotional !!
Next articleTanishq Jewellery Forced To Remove Their Ad From Youtube !!

Tamil nadu Finance minister Palanivel Thiagarajan who is pretty much active in the micro blogging social media site, reacted to the fake allegations that...

Following PMK, Now DMK Trending On Internet For A Wrong Reason !! Check Out !!

A day after their rivals announced an alliance, the Congress is likely to formalise their partnership for the upcoming Lok Sabha elections with MK...