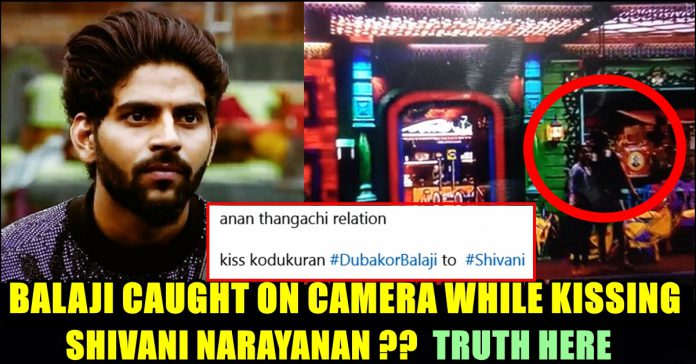 A video clip from the friday episode of Bigg Boss season 4 is being widely shared in the social media, alleging that Balaji Murugadoss kissed Shivani in her forehead. Many followers of the show criticizing the duo for involving in such act after admitting that they have a bonding of brother and sister. However, a twitter user came up with a video to prove that Bala never kissed the “Pagal Nilavu” actress in the Friday episode.

The relationship between Bala and Shivani in the Bigg Boss house has always been under scanner. The physical intimacy they evidently show, made many fans to think that they are involved in a romantic relationship. The duo, however, repeatedly denied it and said that they are friends. Based on a task provided by Bigg Boss, they even identified themselves as brother and sister.

Now, a video is doing rounds alleging that Balaji Murugadoss kissed Shivani on her forehead. Followers have been criticizing them for polluting the Brother-sister relationship.

Check out the video and some of the reactions for it below :

Watching #Shivani behavior in #BiggBossTamil4 now I know why her mother always accompany her for shootings. Akkaku ippatha 19 yrs but pandra velela grade A… night head kiss by bala ah? After mahath Yasika these two will be remembered for =*^¥\>\>#BiggBossTamil

However, a twitter user came up with a video proving that Balaji never kissed Shivani but only turned his head towards her.

Shivani Narayanan, The Chennai based model who started establishing her career in entertainment industry since her childhood days, initially participated in beauty contests and fashion shows at state level. She debuted in Television through Saravanan Meenatchi sereal in a minor role. After appearing in few more serials as lead, Shivani participated in Vijay Tv’s popular dance reality show “Jodi Fun Unlimited” in which she paired with her co-artist Mohammad Azeem who is expected to enter the ongoing Bigg Boss show as wild card contestant.

A twitter used named G. Pradeep who identifies himself as a "Nationalist" through his twitter bio, claimed that actor Suriya paid Rs. 3 lakh...