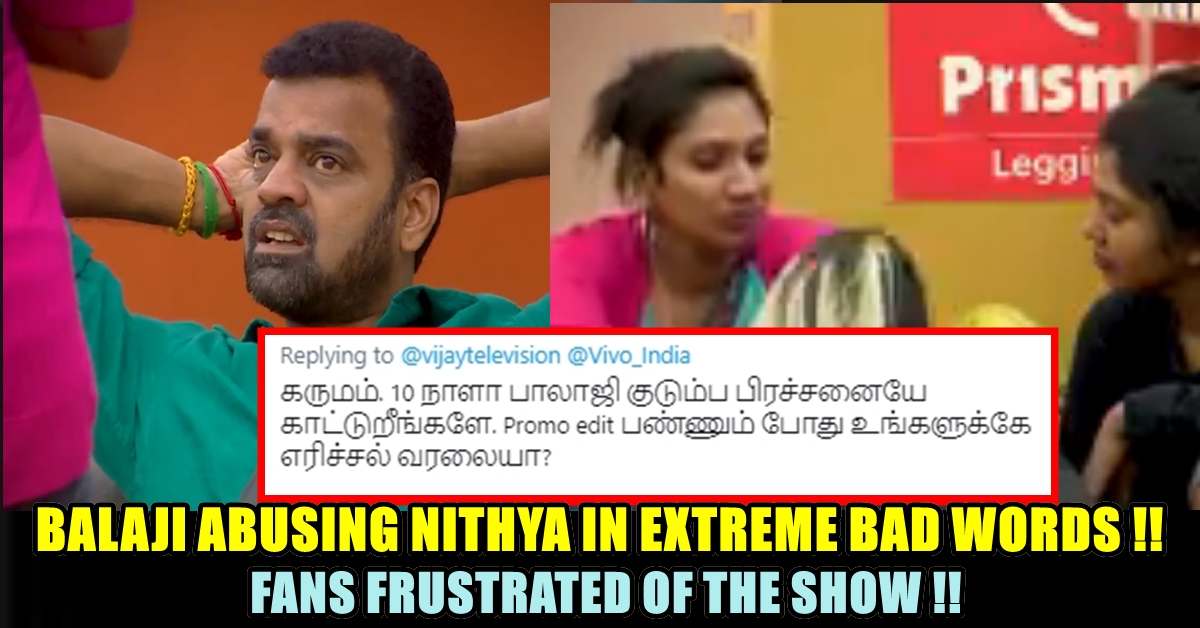 The Bigg Boss 2 Tamil episode began with ‘What a Karvaad’ song and goes downhill from there, especially for the women in house. First, Aishwarya and Yaashika discussed how Ponnambalam crossed the limit and said something inappropriate; the words are beeped on the show. Yaashika told Ramya about this and Mumtaz also gets to hear about this.

When Mumtaz asked Ponnambalam about the incident, he said he was not serious when he made the comment. Ironically, he was the one who shamed the two girls for getting in bed with Mahat as part of a prank. Mumtaz tells him that women decide their own limits and it is not up to him to make that decision for them. She also explained that Ponnambalam cannot claim that the comment was a joke as it was beyond acceptable. So Ponnambalam apologised and said that he will also apologise to others. The luxury budget task is then announced. Bigg Boss asks housemates to divide the house into slaves and masters, with slaves aiding masters in running the house. As women’s team lost the grocery shopping task, they are asked to be the slaves while the men in the house are the masters.

Each woman in the house is ‘assigned’ to one man and are expected to treat them like masters and do every chore that is required of them. Mahat treated Yaashika like the perfect slave and made her do chores around the house, made her clear the bed and even had her help him remove his mike and tshirt before entering the bathroom. Yaashika has to be treated when she gets hurt while folding the blanket. Seeing Mahat, the other men also tried to get work done by the slaves in the similar manner. However, Mumtaz has a problem working under the men and says she has a limit and she will only do things that she is comfortable with. Aishwarya was then seen speaking to Sharik about Mumtaz, and he said, “Initially she was emotional, but now we are seeing something different.” Sharik observed that Mumtaz is being manipulated by Mamathi.

Mumtaz also asked Aishwarya and Yaashika if they will do everything that the ‘masters’ ask them to do. Yaashika and Aishwarya both tell that it’s a task and so one has to do it for the luxury budget. Mumtaz is unhappy and said she is a rebel among the slaves.

Janani and Vaishnavi tried to convince Mumtaz to listen to the masters so that they do not lose the luxury budget. She said she will make sure that luxury budget doesn’t get affected because of her.

Meanwhile in one of the promos that released today it prioritized the estranged husband and wife Balaji and Nithya’s furious conversation. Sendrayan who always trying to make the couple live together did the same in this promo too where Nithya says that she will only be friends with Balaji.

For that Balaji scolding Nithya in bad words which clearly evident in the promo. Not for the first time a lot of previous promos highlighted this couple which left the audience frustrated. Watch the promo and audience response for that !!

Audience also expressed their hatred against Balaji as he is abusing a female in a show where there is every possible way for it to go on air. Check out the comments :

This is Balaji for you guys. Those who supported Balaji now please see his real face

C Balaji body-language, how rude is he😡
Nithya is trying her best to adjust {friendly way} but he’s always torturing her.
The kind of words he’s using itself shows his standard..
Nithya don’t worry tht man is like dandruff in ur head, getting rid of him s hard but its possible

What do you think on this promo , comment below !!

“Don’t Do Like Me Please” Actor Jai Requests People Infront Of Traffic Police !! : Watch Video !!
A Chance For The City Residents To Grow Their Own Food In Real Farm !! : Inspiring Initiative To Be Embraced !!