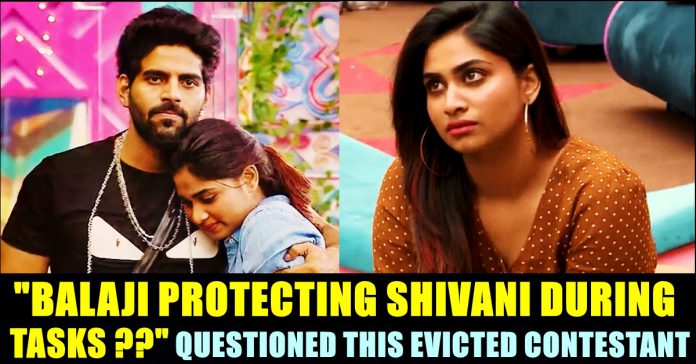 Suchithra, one of the evicted contestants of the ongoing Bigg Boss show, has conducted a poll in her official Instagram account, questioning whether Bala is protecting Shivani inside the Bigg Boss house during tasks. She said that she might enter the house again and asked opinion from her 1 lakh plus followers. She also uploaded the result in her Instagram story.

Suchithra who entered the house as a “wildcard entrant”, spent three weeks in the Bigg Boss house and got eliminated after receiving less number votes from the audience. In her most recent post, she uploaded a picture of herself from an event and said that doesn’t look as grumpy as how Bigg Boss showed her.

During her stint inside the Bigg Boss house, Suchi had a strong bonding with her co-contestant Balaji Murugadoss. She spent most of her time with him and the duo created songs together as well. Suchithra always stood for Balaji Murugadoss while he was facing issues with the other contestants. During her final conversation with Kamal Haasan before walking out of the show, Suchi said that Bigg Boss is her most favourite show and added that she entered the house only as a fan girl.

Now, weeks after getting evicted from the show, Suchithra came up with a story asking her followers to vote for a poll. She wrote “Just wanted a reflective opinion because I might go back in. Is Bala bending the rules in tasks to “protect” Shivani ?”

The relationship between Bala and Shivani in the Bigg Boss house has always been under scanner. The physical intimacy they evidently showed, made many fans to think that they are involved in a romantic relationship. The duo, however, repeatedly denied it and said that they are just friends. Based on a task provided by Bigg Boss, they even identified themselves as brother and sister.

Most recently, Shivani’s mother entered the house during the freeze task and condemned her for flirting with Balaji without playing her own individual game. Now, as the ticket to finale task is progressing inside the Bigg Boss house, many fans felt that Balaji is indirectly favouring Shivani. Balaji is also accused of not nominating Shiavani during the nomination for eviction throughout the season.

Check out some of the reactions in social media regarding the same :

This is not favoritism… Plz don't criticize makkal thalaivi #Shivani

Never seen her keeping her opinions boldly & with clarity too!

Worst thing happened in bb history is #shivani still being inside pic.twitter.com/tkDeN5nMhM

Comment your views on the poll conducted by Suchithra !!

Previous articleMovie Scene Or Real Life ?? Bride Married Guest !!
Next articleSiraj Opened On Why He Got Emotional During The National Anthem !! WATCH