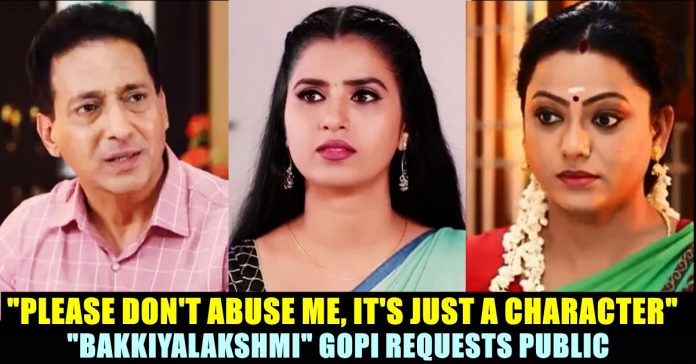 TV actor Sathish who is playing the antagonist role in the widely watched “Bakkiyalakshmi” serial, came up with a video in his Instagram account requesting people not to abuse him for the character he is playing in that serial. He said people should realize the differentiation between a fictional character and a real person. He requested viewers to question themselves on the anger they get on artists.

Sathish has been acting in serials since very long time and made his come back into the television industry through “Bakkiyalakshmi” which is running successfully among the Television audience. The serial which is streaming in Vijay Television revolves around Gopi (played by Sathish) betraying his wife Bakkiyalakshmi by involving in an affair with another woman.

On seeing one of the recent promos, people abused Sathish and sent obscene texts to him it seems. Responding to such texts, Sathish released a video in his official Instagram account and requested people not to abuse him.

“After seeing one of the recent promos, some of you fans and viewers are sending vulgar texts to me in Instagram. I want to tell one thing to such fans. I am Sathish and the one whom you are seeing in “Bakkiyalakshmi” serial is Gopinath. It’s just a character” Sathish said in the video.

“Sending me texts by using bad words for the deeds of a fictional character is not at all fair. Please think. What you people are watching is just a story of a TV serial. You must question yourselves on the anger you are getting on artists. Please think about it” he said.

Hours after uploading the video, Sathish came up with another video thanking fans for the support they provided for his lamentation. “I see the success of “Bakkiyalakshmi” through the love of you people. I will try to do the role in a better way” he said in his next video.

Bakkiyalakshmi is an official remake of Bengali Serial Sreemoyee which airs on Star Jalsha. It is also available on Disney+ Hotstar. In the serial, Sathish plays the role of family man who involves in having an affair with a wife of an another man. He lies to wife and cheats his family to make excuses to spend time with her. Viewers are eagerly watching the serial to see him get caught by his wife and family.

Previous articleRamya Pandiyan’s Brother Parasu Pandiyan Debuting As An Actor ?? Check Out His Hilarious Reaction
Next articleFans Got Disappointed After Hearing About The News On “Karnan” Remake !!

Pan Indian Actress Raveena Tandon who is known among Tamil audience for pairing up with Kamal Haasan in "Aalavanthan" movie, replied to an online...