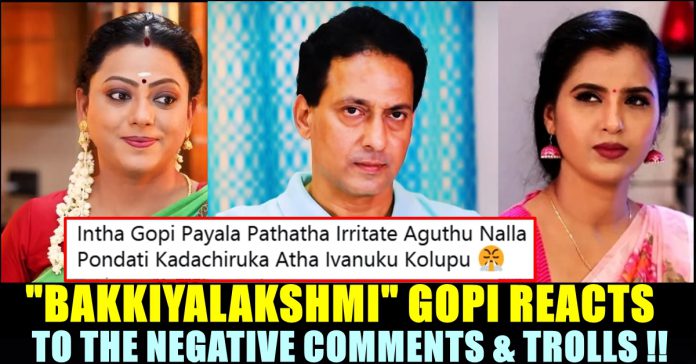 Serial actor Sathish of “Bakkiyalakshmi” fame released a video in his official Instagram account addressing the viewers of the Vijay TV serial. He who is playing a negative character in the serial, said that it’s just a character to the people who are hating him in real life. Sathish has been acting in serials since very long time and made his come back into the television industry through “Bakkiyalakshmi” which is running successfully among the Television audience.

On seeing the negative role he is playing in the widely watched serial, many people are expressing their anger in social media platforms. Responding to them, Sathish uploaded a video in his official twitter account and said that it is just acting. “You people are angry at me right ?? What can I do ?? My owners are giving me salary and I have to act as they say.” he said in the video.

“But you people tell me frankly. Do any of we actors have scope in acting as a hero ?? We can perform only if we get chances to do the antagonist roles. To act as a hero, we should always be as sad as Devadas” Sathish said. “Villains like Raghuvaran, Rajini, Prakash Raj” he added.

“Any way it’s just a story. I assume your scolding and anger as an award. Lots of love and Best wishes.” he said in a video. In another video, Sathish asked people to wear masks and drink lot of water at this summer climate. He advised people not to get dehydrated.

To the people who ask him why he is playing negative role in “Bakkiyalaklshmi”, Sathish said that a real success of an actor lies on the performance he delivers for whatever role he is been given. “Lot of top actors played negative roles in their career to prove themselves” he said. “ennaiyum madhichu, neenga kodukkura anbukkum, kaatra mariyadhaikkum en nandri. Thank you.” Sathish wrote as the caption of his post.

In the “Bakkiyalakshmi” serial, Sathish plays the role of a family man who involves in having an affair with a wife of an another man. He lies to wife and cheats his family to make excuses in order to spend time with her. Viewers are eagerly watching the serial to see him get caught to his wife and family.

Previous articleNetizens Slammed Nivetha For Entering Theatre Despite Of COVID 19 Infection !! Check The Actress’s Reply
Next articleMS Dhoni Fined Rs. 12 Lakh After Getting Out For A Silver Duck !!

The way RJ Balaji handled one of a twitter user who tried to mock him and his upcoming film LKG impressed some of his...

After Bumrah played a vital role in restricting England within 110 runs in the first one day international match, his wife Sanjana who is...