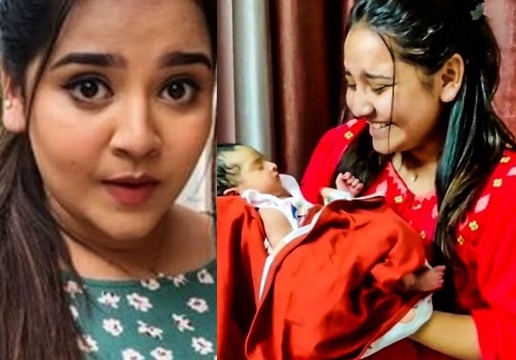 “Bakkiyalakshmi” Fame Neha Replied To Criticism Over Her Personal Life !!

Neha of Vijay Television’s “Bakkiyalakshmi” serial fame replied to her Instagram follower’s criticism on her parents giving birth to a child while she was studying college. Neha said that there is nothing wrong in giving birth to children at any sort of age. She wanted that follower to change his mindset in a healthier way rather than thinking that it is wrong to give birth to child while having another daughter studying college.

Neha has been acting in serials since very long time and rose to fame among the mainstream TV audience after acting in “Vaani Raani” which was telecasted on Sun TV. She went on to act in many other shows including Niram Maratha Pookal, Tamil selvi etc. She made her silver screen debut by acting in “Yatchan” of Vishnu vardhan and acted in “Jackson Durai”.

Currently, she is acting in a serial named “Bakkiyalakshmi” which is being telecasted in Vijay TV. She is also pretty much interactive in 7 lakh plus Instagram followers and is engaging them by uploading her pictures and reels. Most lately she conducted a live session and answered some of their controversial questions.

One of her followers asked what’s wrong in school girl having a pair while parents of a college girl giving birth to a child, in a way of referring to Neha’s parents. Replying to him/her, Neha said “You yourself know that these two comparison has no connection. I don’t think it’s healthy at all”

“No matter whether they have a college studying daughter or not, there’s nothing wrong in giving birth to a child at any age. You must change your mindset” the actress said.

Last year, Neha revealed that her Mother gave birth to a baby girl to her followers and sought wishes from them. “Days ago, I have told you all that I am going to open about an exciting information. Now, its time to tell you about it. My mother was pregnant, Today, she gave birth to a baby girl. I have got a baby girl now. I feel more like a mom now. Thanks to everyone who prayed for us. We need all your blessings, Love you all” she said.

Followed by this, she added a story to those who are going to send mean texts to her. “So guys ! My mother was pregnant since 8 months now ! And today around 3 : 30 PM, she delivered our little princess. our baby girl. Please shower your blessings for both mom and daughter. This would mean world to me right now” said Neha in her next story and added a message to people to who are going to send rubbish messages to her.

“And to all those rubbish reply.. I am gonna get ! I just don’t give a damn dude ! So don’t waste your time” her story read. “This feeling of being a sister and more like a mother is out of the world.” she added. 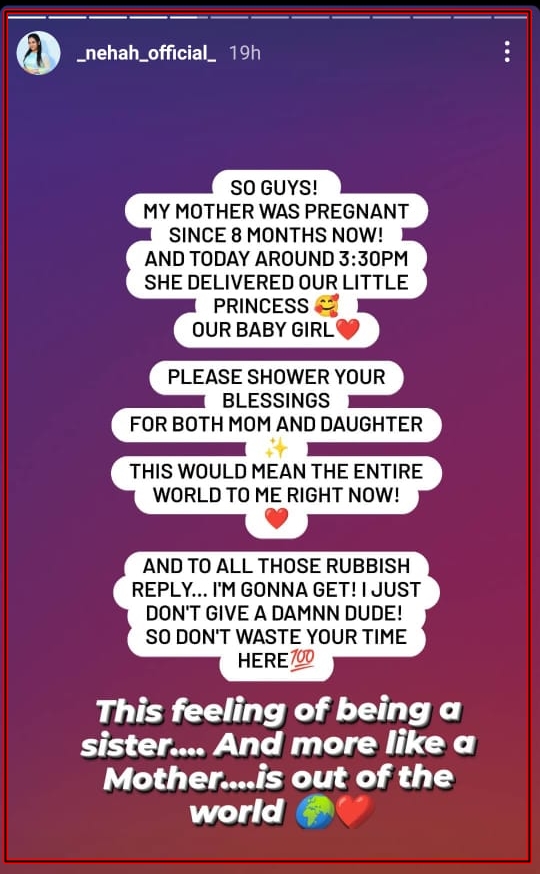