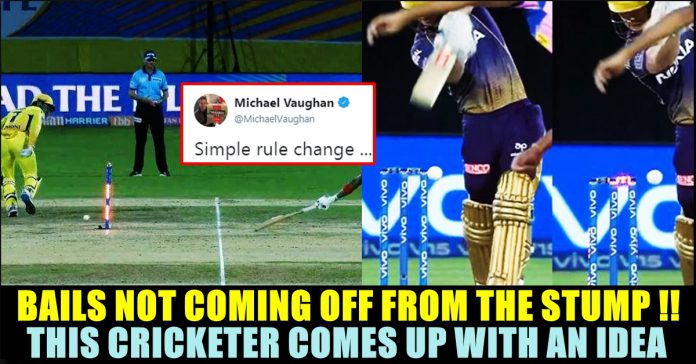 MS Dhoni getting unlucky with his wicket-keeping gloves on is a rare sight to watch as he has pulled off incredible stumpings, catches and run-outs time and again for India and Chennai Super Kings (CSK). However on Saturday, when the defending IPL champions hosted Kings XI Punjab (KXIP) in an Indian Premier League (IPL) 2019 tie, Dhoni got unlucky with his no-look throw when he tried to run out opener KL Rahul in the 13th over. Despite getting a direct hit, KL Rahul survived as the bails did not fall. The incident left Ravindra Jadeja, who was bowling the 13th over, amused. But the ever calm Dhoni reacted to the bizarre moment with a grin on his face.

Similar way in yesterday’s match, Rajasthan Royals team became victim of this. On the first ball of the over, Rahul Tripathi dropped Narine before the Zinger bails failed to come off on the next delivery when Dhawal Kulkarni managed to sneak a delivery past Lynn. Narine and Lynn went on to add 91 runs for the first wicket while the latter scored a fifty as Knight Riders won the game with 37 balls remaining.

Michael Paul Vaughan is an English cricket commentator and former cricketer, who played all forms of the game and a former English captain in all formats. He came up with a solution to this bizarre problem.

The cricketer-turned-commentator believes that the players should be given out if the bails light up and not necessarily fall down. “Simple rule change … If the Zinger bails are going be used which I like .. If the Ball hits the stumps and the Bail lights up then it must be OUT … We can’t be having Bowlers Bowl a Batsman out then the bails not to come off but the Zingers be flashing .. #IPL2019,” Vaughan wrote on Twitter.

Simple rule change … If the Zinger bails are going be used which I like .. If the Ball hits the stumps and the Bail lights up then it must be OUT … We can’t be having Bowlers Bowl a Batsman out then the bails not to come off but the Zingers be flashing .. #IPL2019

Isn’t all these imperfections make the game even more beautiful?
Too much technicality will make it boring.

The point of their existence is to be dislodged to indicate a wicket. Laws shouldn’t be changed to accommodate flashy lights.

Yeah right Michael sir This happend 3 times in this ipl

When the rules were framed, the bails were simple wood with normal/light weight resting on simple grooves but after the Electronic aided stumps were introduced, the rules also should be suitably amended.

What do you think on this idea suggested by Vaughan ?? Comment your views below !!

Being one of the prominent movie reviewers of Kollywood films, Blue Satta Maaran debuting as director and planned to elevate his film career to...