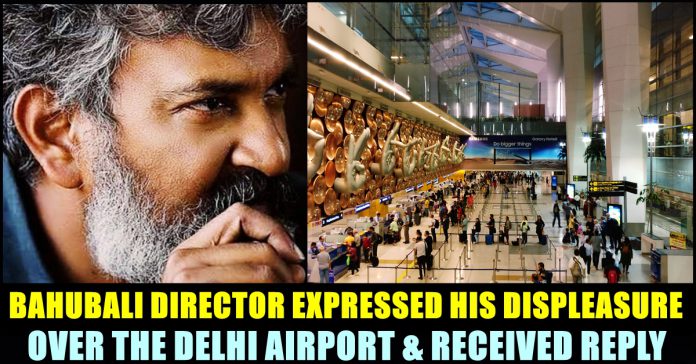 Influential filmmaker SS Rajamouli who is known for directing the most popular “Bahubali” series, expressed his displeasure over the maintenance of Delhi airport through a couple of tweets. He who enjoys 54 lakh plus followers for his handle, said that Delhi airport will not give a great first impression of India for the foreigners. The filmmaker made the request by tagging the official twitter handle of Delhi airport.

Rajamouli who is currently busy making the magnum opus of Indian cinema “RRR” with Junior NTR and Ram Charan, said that the passengers were supposed to sit on floor to fill the RT-PCR test forms with no tables provided for them to sit. He called it as a “simple service” and said that it is not a “pretty” sight as the passengers were propping against the walls to fill the forms.

The filmmaker also pointed out the stray dogs in the hangar outside the exit gate and said that it will not make a great first impression for the foreigners through his tweets. Rajamouli ended the tweet thread requesting the authorities to look into the issues. His first tweet read “Dear @DelhiAirport, arrived at 1 AM by lufthanasa flight. Forms were given to fill for the RT PcR test. All the passengers are sitting on the floors or propping against the walls to fill the forms. Not a pretty sight. Providing tables is a simple service.”

He went on to add “And surprised to find so many stray dogs in the hangar outside the exit gate. Again not a great first impression of India for the foreigners. Please look into it. Thank you…” in his second tweet. Check out his tweet below :

And surprised to find so many stray dogs in the hangar outside the exit gate. Again not a great first impression of India for the foreigners. Please look into it. Thank you…

Replying to this complaint of the filmmaker, Delhi Airport’s official twitter handle said “Dear Mr. Rajamouli, thank you for your valuable feedback and this provides us the opportunity for improvement. We have desks at the designated areas for RT-PCR-related purposes; however, increased number of desks and visibility at other locations will improve experience on arrival and our team is looking into this on an urgent basis.”

arrival and our team is looking into this on an urgent basis. (2/2)

Check out some of the reactions for Rajamouli’s tweet :

Better if the forms are distributed in Flight itself before landing.. so that passengers can fill it up!!🧐🤔

My impression: One of the worst and clumsiest airports I've ever seen !

My humble request to @DelhiAirport to maintain our country's capital's airport in good condition. We are already portrayed really bad by foreign media as a poor country and airport is generally the first impression.

Previous articleLakshmy Ramakrishnan Replied To A Follower Who Asked Her To Take Legal Actions Against Vanitha !!
Next articleVanitha Vijayakumar Walked Out Of BB Jodigal Show !! Check Why