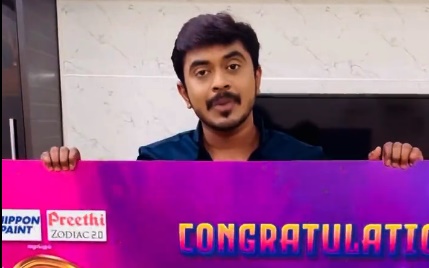 Azeem’s First Video After Coming Out Of Bigg Boss House!!

Azeem released his first video after coming out of Bigg Boss house, addressing his fans. The Bigg Boss winner said that he is going to donate Rs. 25,00,000 from his winning amount to the children who lost parents due to COVID19 virus. Thanking his fans and followers for keeping him inside the house throughout the show, Azeem said that he wanted to do something for the people who made him stay inside the house by voting for him, irrespective of the trolls and criticisms.

Mohammed Azeem who got condemned by Kamal Haasan throughout the season due to his behaviour towards other contestants, has been announced as the winner of Bigg Boss season 6. Not only Kamal Haasan, in several occasions, Azeem got severely criticized by the viewers of the show for the way he behaved towards his co-contestants. However, he ended up winning the title, competing with Vikraman.

Now, for the first time, he came up with a video in his social media handles, addressing his fans who casted vote for him to stay inside the house. “As I said that day, I’m going to give Rs. 25 lakh of my winning amount for the education of the children who lost parents due to Corona virus” Azeem said.

“I’m going to create an open account. Whoever came approach seeking help. All the data will be updated in a social media page by hiding the name of the beneficiary. Half of the amount of my winning prize goes to my Tamil bloods. I want to do something for those who made me stay inside the house after so many nominations” he further said in the video.

“World’s best word is “seyal” and I’m going to do what I said inside the Bigg Boss house. This is giving back to the society. This is not even 1% of what you people did for me. I hope you people will stand by me for whatever I do in the future. I know you people will support me in every step of my career” he said.

“As I would always say, I won’t fall, I will evolve bravely because I’m a Tamizhan” he concluded.

As I promised, half of my winning amount ₹25,00,000/- will be contributed to the education of children who lost their parents during Covid-19. 🙏🏼

This is just the start of me, giving back to the society the love you gave me. Forever i will be greatefull to all of you 👍🏻 pic.twitter.com/G2lN43xcmc

Previous articleActor Vinay Is In Relationship With This 42 Year Old Actress??
Next article“Give Me Opportunity Lokesh” – Actress Tagged The “Vikram” Maker

A video of actor Ajith kumar furiously looking at a fan who tried to pose with him for a picture without his consent, is...