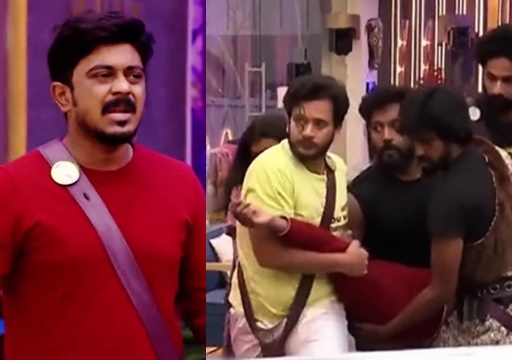 Azeem became the subject to twitter trending again after using his health as an issue to play the task in favour of him. He who fainted on the live streaming of Tuesday episode, was excused by his housemates to sleep inside. Using the opportunity, Azeem stole the flowers and even pretended like he didn’t do it so to the alien team.

While sitting aside Kathir, Azeem who tried to get up and walk, fell on the floor, to everyone’s shock. Kathir and ADK lifted him from the floor and tried to get him up. In few moments, all the contestants surrounded the television actor and tried ways to bring him back to normal. With the help of Manikantan, Ram, Vikraman and Kathir took him near the medical room and asked Bigg Boss to open the room.

Oh my gosh this is too bad
This man suffers a lot💔#biggbosstamil #Azeem #biggboss6 pic.twitter.com/b9oaMtbtuZ

Moments later, he returned to the house and Vikraman informed to Janany and Dhanalakshmi that he suffered from high BP to an extent of 190. Before going to the rest room, Azeem thanked his contestants for helping him.

During the night, Alien team and tribal team made an agreement between them about not stealing anyone’s belonging and went to sleep as they were tired. However, Azeem who was allowed to sleep inside the bedroom due to his illness, used the opportunity to steal the flowers.

For the One Who Are Awake

Here’s the video of it :

Aliens trust Azeem so much that they are asking the thief for advice regarding the case.#BiggBossTamil6pic.twitter.com/G86M3vhvfh

Check out some of the reactions Azeem’s series of activity received :

#BiggBossTamil6
The doctor who checked and announced Azeem has high BP 190 😏 pic.twitter.com/SCJp2c1ufZ

If #Sherina was wrong #Azeem is also wrong.
Due to health, bedroom la thunga sonnanga. U can’t take that as advantage.

If u wanna play u should have stayed outside & sneaked in👎
That’s gentleman play.
This is ❌️#biggbosstamil6 #shivin #vikraman #ayesha #rachitha #ADK #dhana pic.twitter.com/K18bpzcryy

What #azeem Stategy Can’t able to understand. 😳. Where is the Flower Now.?#BiggBossTamil    #BiggBossTamil6 #BiggBoss pic.twitter.com/0viPAabGbd

What #Azeem is doing is echathanam. People supporting him now also are Echais. #BiggBossTamil6

Sherina was roasted for using her health issue in game,wat azeem did now is no different from sherina. Will azeem be roasted by KH for his cheap Play nd for spoiling de task?@vijaytelevision @ikamalhaasan

Previous articleSHOCKING : Azeem Fainted Due To High BP !! Returns After Treatment
Next articleVijay Devarakonda In Deep Trouble Because Of “Liger”??

Virat Kohli doffed his hat to MS Dhoni after the two men starred in a six-wicket win for India in the second ODI of...

Actor Siddharth is one of the active social media user who raised his voice through it for every issue that is taking place. Known...