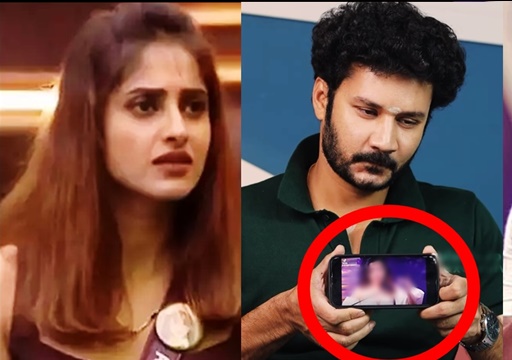 Television actor Vishnu who shared screen space with Ayesha in a serial named Sathya that got telecasted in Zee Tamil, appeared in an interview for Galatta YouTube channel in order to make his clarification regarding the recent interview provided Dev, Ayesha’s ex-boyfriend.

Vishnu said that it is not fair to talk about a woman who is not in a state to defend herself, referring to her stint in the Bigg Boss show. He also showed a video of TV anchor DD encouraging women to given up on their toxic relationships without hesitation.

An alleged ex boyfriend of Bigg Boss contestant Dev appeared in an interview and accused the serial artist of cheating many men in the pretext of love. He who identifies himself as an assistant director, claimed that Ayesha got the opportunities to act in Television serials due to his influence. According to the youth, Ayesha got married two times during her teenage and was involved in romantic relationship with several men including Vishnu, her co-star.

Dev said that he met Ayesha while she was studying in Chennai Amritha and they developed a love relationship through one of their mutual friends. Ayesha reportedly mentioned about Dev inside the Bigg Boss house, saying that he had her in his control but the latter denied it in the recent interview he provided to Newsglitz.

The youngster said that he featured in a famous tik tok of Ayesha and removed it due to the obscene content it contained. “But Ayesha accused me for that in the show” Dev said in the interview.

Further, he said that Ayesha cheated him and he is the victim in their relationship. “Her family got her married while she was just 16 years old. She got married another time, a couple of years later” said Dev aanand in the interview.

Going by his statement, Ayesha was in relationship with 4 men so far, apart from her 2 marriages. Dev said that he went to Ayesha’s house to talk about their marriage but they started torturing him physically one whole day.

Now, reacting to the accusations made by Dev, actor Vishnu appeared in an interview with Galatta YouTube channel and said that it is not fair to talk ill about a woman who is not here to defend herself. The actor said that it is a real man would do and added that he feels glad if he is the reason if Ayesha broke up with him.

Vishnu made it clear he is just a friend of Ayesha and is bold enough to admit if he falls in love with her. He also requested media portals to do background check of the guests they are inviting to their shows and asked them to do “Ethical journalism”. Further, he went on to state his opinion about the ongoing Bigg Boss show and about Ayesha’s performance in it.

The Indian cricket team is currently playing a day night warm up game against Australia starting on Friday. The contest is expected to serve...