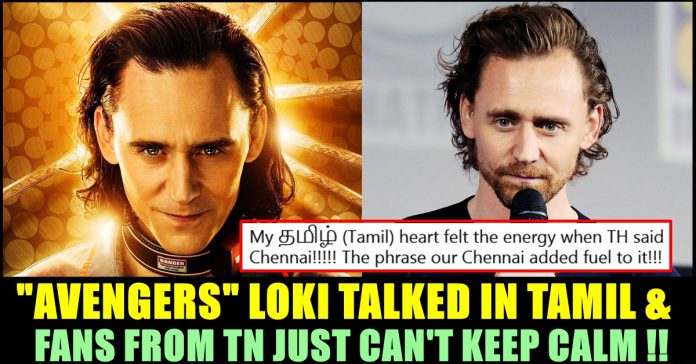 Tom Hiddleston of “Avengers” fame named Chennai as his favourite Indian city and uttered a word in Tamil language which made the Internet users of Tamil nadu to go gaga over it. The British star who played Loki in six MCU movies including “Thor”, “Avengers”, “The Dark World”, “Ragnarok”, “Infinity War” and “Endgame”, in his recent interaction, said that “Chennai” city is great and revealed about his sister living in the Tamil speaking city.

In an interview in 2012, Tom talked about his connection with the city. “I have family in India. My sister stays in Chennai and I’ve been to India about four times so far. The last time I came was in October last year (2011)… I came very quietly just to see my sister. I love it there.” he said in that interview. He also got introduced to few of the Bollywood films by his sister. The Hollywood actor said that Shah Rukh Khan impressed him a lot through his films “Devdas” and “My Name is Khan”

It has been revealed that the marriage of his sister Sarah took place in Chennai. Tamil fans has always been fond of the movies made under Marvel Cinematic Universe. Now, in a recent video that released by “Disney Plus Hotstar”, Tom played the “Word association” as a part of the promotion for the upcoming series “Loki” that is going to be streamed in the web platform from 9th of June.

When he was asked to associate the word “India”, Loki, without delaying a second said “Shah Rukh Khan”. He was said the same when he was asked to say something about “Bollywood”. While associating the terms “Indian city”, Loki said “Chennai”. “My AKKA lives there, she used to live there. I have been there a few times. Chennai is Great” he said. It is worth mentioning that “AKKA” is a Tamil word used to say elder sister.

Tom Hiddleston’s cheekbones and wit cut sharper than glass and we are here for it! 👀😍 Watch #Loki streaming June 9 pic.twitter.com/FodbnUS61j

As soon as the video surfaced, fans from Chennai city and state Tamil nadu can’t keep calm as they started sharing the video widely with expressing their love towards Loki. Check out some of the reactions below :

THE WAY HE PRONOUNCES CHENNAI I CANT BREATHE pic.twitter.com/it86S3h3Su

My தமிழ் (Tamil) heart felt the energy when TH said Chennai!!!!! The phrase our Chennai added fuel to it!!! #Loki pic.twitter.com/zhhC5hE6wG

I CLAIM LOUIS AS MY DESI DAD
HE IS DESI , BORN AND BROUGHT UP IN CHENNAI. AND HE IS GOING TO RELEASE LT2 ON GANESH CHATURTHI !

Previous article“I Know What Is Best For My Baby” – Sameera Sherif Replies To Harsh Comments
Next article“No, Mine Smell Like Roses” – Shruthi Haasan Replied To A Dirtiest Question Of Her Follower !!

A 39 year old Food Delivery agent named Raees Sheikh got arrested after a 19 year old college student registered a complaint against him...