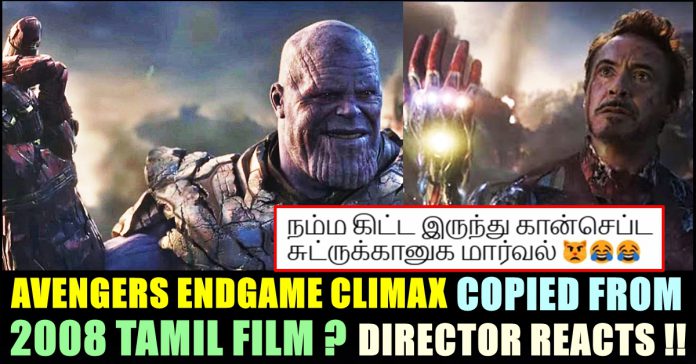 Since Tamil cinema fans accused Oscar winning Parasite for having something similar to 20 year old Tamil film Minsara Kanna, the accusations on foreign films continues to take place in social media platforms by Tamil audience. After director Amudhan accused John wick for having similar plot line with his Tamizh Padam, now director Chimbu Devan has reacted to a meme which compared his film with American film Avengers endgame.

Chimbu Devan is a filmmaker who debuted to Tamil cinema through “Imsai Arasan 23-m Pulikesi” which is a period-comedy drama. The film became a huge blockbuster as it had legendary comedian Vadivelu in the lead role. Known for making fantasy movies, Chimbu Devan made several films including “Puli” which had actor Vijay in the lead role. He also made a Western comedy film Irumbu Kottayil Murattu Singam. But the film which allegedly inspired Avengers Endgame is Arai En 305-il Kadavul, according to a Twitter user.

The film stars Prakash Raj, comedian Santhanam in his first film in the lead role, alongside Ganja Karuppu, Prakash Raj, Jyothirmayi, and Madhumitha in the lead roles. Prakash Raj who played as God in the film, would control the world with the help of a magic box. In the American superhero film, Thanos would use stones to destroy the world. Both of them tries to control the world by snapping their fingers. The meme creator who compared these in his video, accused Marvel universe for copying concept from Arai En 305-il Kadavul.

Watch the video he posted below :

Director Chimbu Devan reacting to this meme is the best part about the meme. He replied to this meme by commenting a shock emoji and laughing emoji to express his emotion. Check out his tweet below :

Earlier Producer Thenappan, who produced Minsara Khanna alleged that he is going to file case against Parasite for plagiarism. The similarity between “Minsara Kanna” directed by K.S Ravikumar and “Parasite” is the members of a poor family getting employed to a rich family without introducing themselves as a family members. Followed by him director C.S Amudhan who is known for making parody of Tamil films, posted a tweet comparing the world famous “John Wick” of Keanu Reeves with his sequel of Tamizh Padam, in a way of trolling “Minsara Khanna” makers.

It has been brought to my notice that certain elements of John Wick like his dog being killed to bring him back to his old job, strongly resemble key plot points of Tamizh Padam 2. We will keep all our legal options open.

It is good to see, Chimbu Devan taking it in a light note, unlike Minsara Khanna producer. Comment your views on the meme and Chimbu’s reaction to it !!

Previous articleActor & Director Replied To Fan Regarding “MASTER” Update !!
Next articleGuy Argued With Swiggy In Twitter & Got A Free Ice Cream !!

“Ask These To The One Whom You Voted For” Female Celebrity’s Fitting Reply !!

Random guys sneaking into the social media accounts of cinema celebrities only to spread hatred is increasing day by day. Social media is...

Actress Priyanka Chopra Shared A Private Picture Of Her With Nick Jonas !! Got Extremely Trolled !!

Actor Priyanka Chopra and her singer husband Nick Jonas are off to their yet another adventure with their family. The couple, along with the...