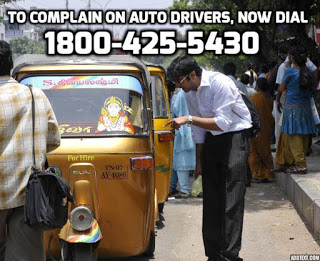 AUTO DRIVER OVERCHARGING YOU? NO PROBLEM, NOW YOU HAVE A SOLUTION FOR THIS..

To complain on auto drivers, now dial 1800-425-5430
Did you know that the state transport department has launched a toll-free number to register complaints relating to autorickshaws? The department launched the number 1800-425-5430 last week, but is yet to publicise it.
An official said they started pasting stickers displaying the number on autorickshaws in the city on Tuesday . In another week, every autorickshaw in the state would have the stickers, he said.
The department had earlier allocated landline numbers for registering complaints from passengers in Chennai. But there was no separate number for registering complaints in the districts.
Passengers were advised to register complaints with the landline numbers in the transport offices. But, calls to these landline numbers were not answered after office hours. A toll-free number was among the directives given by the Madras high court which has taken a zero-tolerance stand on erring autorickshaw drivers. The court has asked the government to ensure GPSenabled meters in autorickshaws within six months.
Detailing the advantages of the toll-free number, a senior transport department official said now passengers can register complaints 24×7 from any part of the state. The complaints will be sent to the regional transport offices through mail immediately .Complaints that come in after the office hours with reach the RTO the next day.
The RTOs have been asked to act on the complaint and send a report to the head office. An officer in the rank of joint commissioner has been entrusted with the work of monitoring the functioning of the toll-free number and action taken. When you dial the toll-free number, you will be asked to select desired language (Tamil or English), following which the place, name of the complainant, autorickshaw registration number and the actual complaint are asked for, in that order.
Source – Times Of India
Previous article16 Horrible Rules Of Panimalar Engineering College, Which Is More Stricter Than Sairam
Next articleHere’s How Kamal Hassan Became A Dwarf For Appu in ABURVA SAGODHARGAL ! Technique Revealed..

Team Bangladesh Getting Brutally Trolled After Getting Out Of Asia Cup !!

Team Bangladesh became a victim of severe online troll after getting out of the Asia cup tournament. Members of the team which is known...