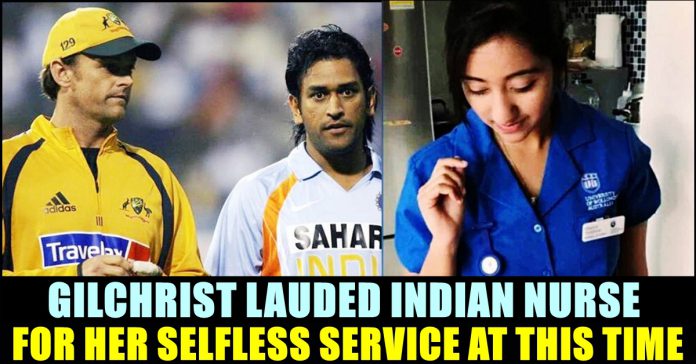 Adam Gilchrist who is known for his participation in Australian cricket team, has came up with a video message lauding an Indian student who is working as a front line medical worker in Australia during this COVID 19 pandemic. The cricketer encouraged her to keep doing her service and have a huge shout out for her through a selfie video.

Sharon varghese from Kottayam in Kerala is a registered nurse in Australia since March month. After graduating from the university of Wollongong, she wanted to enroll herself in a hospital where she knew COVID 19 patients were being treated. At the time she joined, the Corona pandemic forced the entire world to go into a lockdown. However, Sharon joined in a aged-care facility in Wollongong where healthcare workers from far off places could not reach. She worked there as a junior nurse while she was a student and immediately said “Yes” when she was approached to join again.

On seeing her brave decision of serving his nation, Gilly who is very much known for his keeping skill, released a video praising the youngster, video of which is going viral in the social media platforms. “Congratulations Sharon, on your selfless act. You gave your time to work as an aged-care worker throughout the pandemic” said Gilly in his video which was released in a twitter page named as “Austrade India”

Adam Gilchrist gives a shout out to Sharon Vergese a nurse from @UOW who has been working as an #agedcare worker during #COVID-19. https://t.co/NfT0Q7G6P8

“Just want to let you know, all of Australia, all of India and more importantly your family will be very proud of your efforts.” the cricketer added to laud her efforts during the tough times.

Reacting to this video, Sharon told to media that she was really bowled over by the legendary Australian cricketer. She said that her father was a big time cricket fan and loves Adam Gilchrist. This video from the left hand opening batsman and wicker keeper made Sharon’s father really proud.

Sharon was living in Australia since 2016 and said that she wanted to work in a COVID hospital. But she said that she is enjoying her stint in the aged care home. She now plans to pursue her masters in nursing. The United Nurses Association (UNA) has lauded the young nurse, adding that out of 20 lakh registered nurses at least 15 lakh are from Kerala.

Followed by this, David Warner, another Australian player, who is becoming a sensation through his South Indian Tik Tok videos, lauded a Bengaluru student for his selfless work in Australia during this Pandemic. The student who is named as Shreyas Sresth who is doing his Masters in Computer science in the University of Queensland, got appreciated by Warner for his service which is required right now.

#Australia values Indian students contribution during #COVID19 to help the community in Australia.
Here's a video from @davidwarner31 thanking Shreyas for the work he has done during the pandemic.https://t.co/PsnbouDPGx#InThisTogether #InAusTogether @AusHCIndia 🇦🇺 & 🇮🇳

BJP politician H. Raja who is known for his controversial statements and public speeches, on Tuesday, uploaded a picture of a car in his...

Actor Dhanush who is known for acting films, predominantly in Tamil film industry, had sent a legal notice to a couple who claimed that...