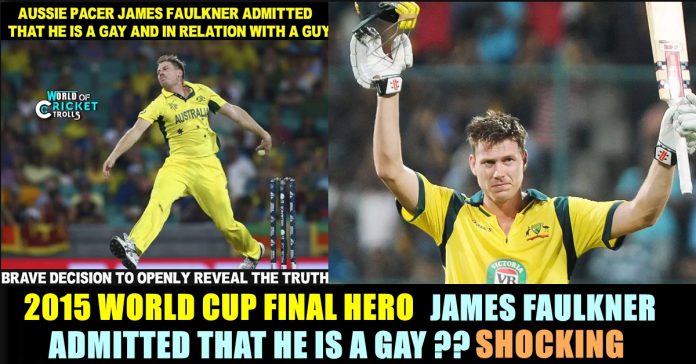 Australian All Rounder James Faulkner Admitted That He Is A “Gay” ?? SHOCKING !!

On the morning of 29th April 2019, Australia’s renowned all-rounder cricketer James Faulkner uploaded an image from his Instagram profile on the occasion of his birthday. The cricketer, who turned 29 posted a picture of him with his housemate Jubb and his mother Roslyn Faulkner celebrating his birthday with the hashtag #togetherfor5years. He described Jubb as his boyfriend in it.

In his caption, the Aussie wrote: “Birthday dinner with the boyfriend @robjubbsta and my mother @roslyn_carol_faulkner… #togetherfor5years”

As soon as the image was made public, the world took to Instagram, Twitter and the rest of social media in congratulating the former international cricketer for ‘coming out’, taking this post as Faulkner’s way of opening up about his homosexuality. The former international-level cricketer was even greeted by ex-teammates for ‘gathering enough courage’ to finally let the world know about his sexual orientation.

But the Australian all-rounder Tuesday said he is not gay and his Board offered an apology for any “unintended offence” after his social media post with “boyfriend” Robert Jubb led to speculation that he is homosexual.

In a new post on Instagram, Faulkner wrote, “There seems to be a misunderstanding about my post from last night, I am not gay, however it has been fantastic to see the support from and for the LBGT community. Let’s never forget love is love, however @robjubbsta is just a great friend. Last night marked five years of being house mates! Good on everyone for being so supportive.”

There seems to be a misunderstanding about my post from last night, I am not gay, however it has been fantastic to see the support from and for the LBGT community. Let’s never forget love is love, however @robjubbsta is just a great friend. Last night marked five years of being house mates! Good on everyone for being so supportive.

The CA said it understands that coming out can be emotionally tough. “The post was not in any way meant to make light of this and, though the support from the community was overwhelming and positive. Cricket Australia apologises for any unintended offence,” it concluded.

A veteran of one Test, 69 ODIs and 24 T20 internationals, Faulkner had last donned the Aussie baggy green in a T20 match against Sri Lanka at the Adelaide on February 22, 2017. The all-rounder had won the Man of the Match award in the 2015 World Cup final which Australia had won by beating New Zealand by 7 wickets.

Previous articleThis Internet User Abused Oviyaa For No Reason !! Here’s How She Gave Him Back !!
Next articleRohit Sharma Destroyed Stumps In Frustration !! Got Punished In This Way !!

As a result of a petition moved by Rudra Vanniyar Senna Organisation, a Chennai court ordered police to file FIR against actor Suriya and...

Actress Yami Gautam who is known for acting in films such as "Uri : The Surgical Strike", "Bala", " Vicky Donor", on Thursday, slammed...

Samantha, DD, Chinmayi & Others Reacted To Rolling Stone’s Attempt Of Fixing The Damage !!

After Rolling Stone Magazine released the digital cover for "August 2021" by having a picture of Arivu alone, actress Samantha Ruth Prabhu, season Television...