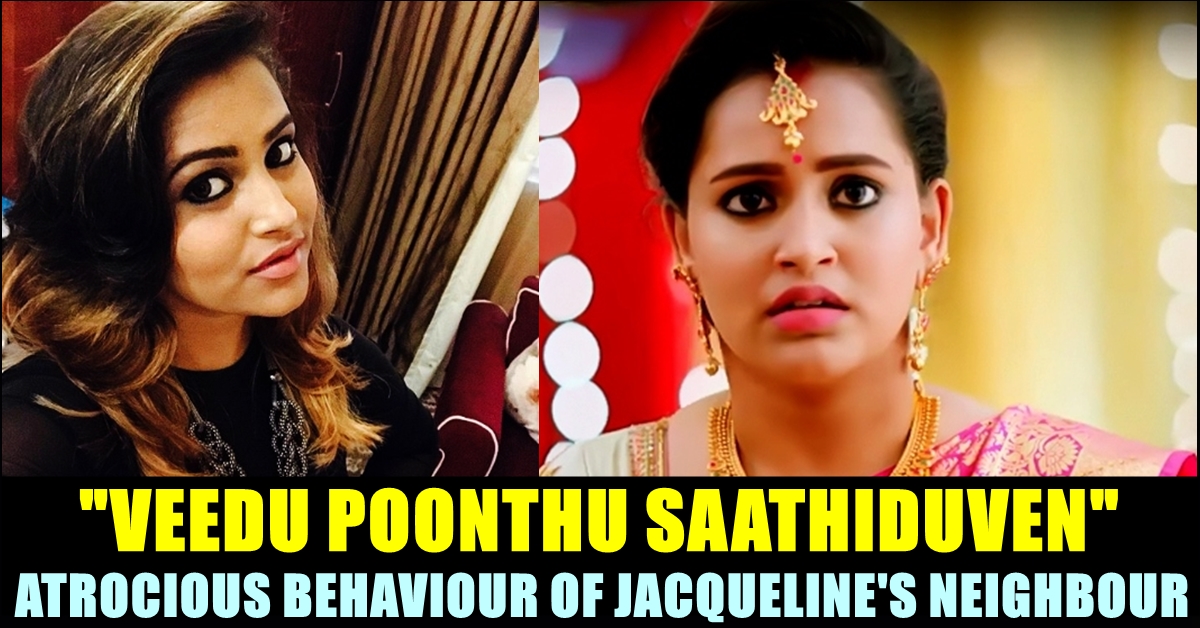 At this pandemic situation, we humans are ones who has to look after the other creatures. Just uttering the phrase “The World Is Not Just For Humans” often or posting it as status in social media platforms is not going to help them survive. We have to give them food as much as we can at this critical situation. Not only humans, the entire world including animals and birds are suffering due to the Corona outbreak without food. Though there are reports saying that the nature is reforming for past few days due to less human activity, street dogs are suffering a lot as they would get food only through mankind.

Now for trying to help them a bit, actress Jacqueline who is known for her appearance in Vijay TV was abused by her neighbour. Jacqueline who recently appeared in “Kannum Kannum Kollayadithaal” in cameo role debuted in “Kolamaavu Kokila” as Nayanthara’s sister. She is also doing lead role in a popular serial in Vijay TV. She gained popularity by hosting reality shows in the same channel.

The actress recently shared how she got threatened by her neighbour for feeding street dogs at this pandemic situation. In her Instagram story Jacqueline said that he threatened to enter her house and beat her but spared her as she is christian. She asked what her religion has to do with this. She said that she done a mistake by keeping food for street dogs in front of his house.

The dogs in her house started barking at the street dogs which instigated the neighbour to let those harsh words off his mouth. Though Jacqueline apologized, the neighbour went on to disturb her mentally by dragging her religion. “Today there was a fight with my neighbour… I did a very big mistake, I kept food for the street dog in front of his gate though I have dogs in my house they continuously shout seeing other dogs (Very big mistake) and I apologized for the mistake and he told me one word that was very disturbing for me so I want to share it with you all “veedu pugunthu saathiruva christi*** ponnu nu vidra” I don’t know this thing to do with my religion. Pls be humans at least in this situation” she wrote in her story.

People asking pet owners to keep their pets silent is common. But dragging their personal things such as religion and cast during the argument is totally condemnable. Comment your views on this incident shared by the actress !!

Young Indian Girl Raped By Doctor In Corona Isolation Ward !!
“What Are You Waiting For?” Kamal Haasan Slammed State Government !!