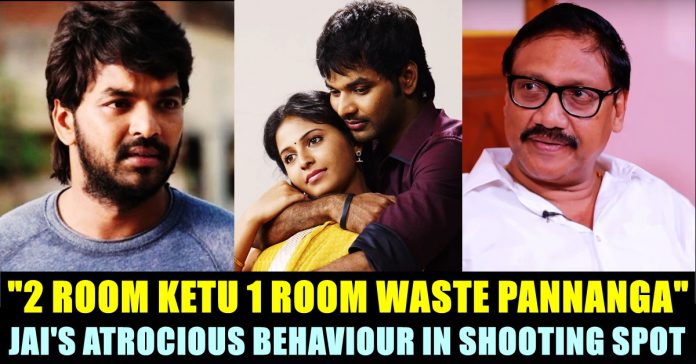 Producer Nandakumar’s regretful video interview with Vikatan about the atrocious behaviour of actor Jai in the shooting spot of “Balloon” movie has released. Poster Nandakumar who is known among Tamil audience through the movie Madras in which he played the role of a politician also acted in Kabali along with Rajinikanth. While talking about the humbleness and punctuality of the Superstar during “Kabali” shoot, Nandakumar remembered about the incident that was caused by actor Jai in the movie he produced.

Actor Jai debuted in Tamil film industry through Vijay’s Bhagavathi movie. In the movie which was released in the year 2002, the actor played the role of Vijay’s younger brother. The plot of the movie revolved around the death of Jai and he was highly recognised by Tamil cinema audience for his looks which is very much similar to actor Vijay. After that he made his debut as one of the lead in Venkat Prabhu’s sports drama Chennai 28. However actor Jai became one of the most sought after actor after the release of Subramaniyapuram in which he played a role of a gangster in 1980’s.

While talking about the atrocious behaviour of actor Jai, Nandakumar said that he never seen any actor who wastes the money of a producer like Jai. “By saying that Anjali is suffering from stomach pain, he stopped the movie’s shoot and went to Chennai when the movie’s shoot took place at Kodaikanal.” said Producer Nandakumar who complained about Jai’s absence in promotional functions of his own films.

“Anjali is a gem of a person. She is very dedicative and would do anything that requires for the shoot. I don’t know how he spoiled her with his behaviour. That day when we had double door caravan for Anjali to change dress, Jai stopped her and demanded single door caravan which resulted in 4 hours of delay in the shooting. Lot of money went in vain that day and the entire movie faced huge loss only because of Jai” said Nandakumar.

“For one room it takes nearly 12,000 rupees in Kodaikanal. They (Jai and Anjali) asked us to book two rooms and never opened the other room. When we asked them to stay in room, they denied and wasted the money of us.” Nandakumar further added.

“When director Sinish called Anjali by her name, Jai who was present at the place couldn’t hold his nerve and had a verbal spat with the director. The next day he went to Chennai with Anjali and called Sinish only to say that he stopped the shoot successfully” explained Nandakumar about the atrocious behaviour of actor Jai. In the end of the interview, Nandakumar says that he forgot about producing films only because of actor Jai.

The film “Balloon” has Jai, Anjali and Janani Iyer in the lead roles and the music for the film was composed by Yuvan Shankar Raja. The film doesn’t made much impact as it received mixed reviews from the audience and critics.

Previous articleGayathri Raguramm Banned From Twitter For This Reason !!
Next articleOnline User Made Unnecessary Comment On Amit Bhargav’s Wife !! Check His Reply !!

Actress Pooja Hegde who is going to pair with actor Vijay in his upcoming flick, recently announced that she got tested positive for the...

Director and Lyricist Vignesh Shivan conducted a chat session with his Instagram followers and the most of the questions that were asked were related...