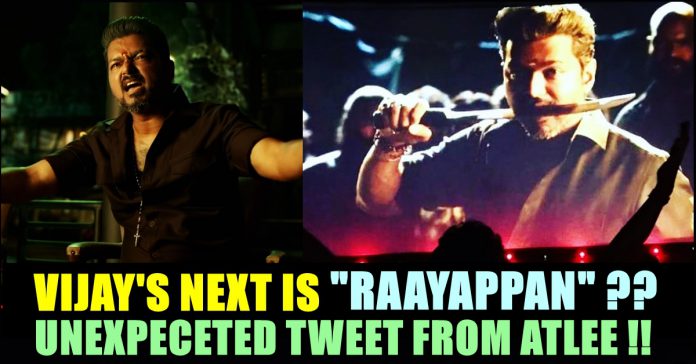 Audience saw actor Vijay in three different get ups in Atlee’s Bigil. One of a character was named as “Rayappan”. The role which had actor Vijay in his late 50’s for the first time, attracted the audience in big time. Vijay played the character with so much effort as it required special abilities.

“Rayappan”, being a stutter, acted as the head of his slum and aspired his son to become a national level football player to change the identity of his slum. Unfortunately, he gets stabbed by his enemies which makes his son as a gangster. Fan who loved “Rayappan”, started requiring director Atlee to make another film with Vijay.

Few fans went one step ahead and demanded the director to make a “prequel” of Bigil by having “Rayappan” as full length lead. The fan who watched the first half of the film wrote “Verithanam 1st half. I can only say two sentences. My Mom is crying. Need a rayappan prequel very badly.”

#Verithanam 1st half.
I can only say two sentences.
My Mom is crying.
Need a rayappan prequel very badly.#Bigil

Another fan endorsed this tweet and said that he need a “Prequel” for “Rayappan” character.

Atlee who witnessed these tweets, replied to them in a positive way. The director responded immediately with a tweet in Rayappan’s style. The former assistant of Shankar wrote “Senjutaaaaaa pochuuuuu nanba” in his tweet while responding to that fan. Check out the tweet he posted below :

As soon as replying, the tweet went viral among Vijay fans who started celebrated it. Check out some of the reactions below :

Actor Vijay who is currently busy in acting for his upcoming film, has already collaborated with Atlee in three films. On the other hand, director Atlee is rumoured to make a film by having Junior NTR in the lead. News also surfaced that he is going to direct Shah Rukh Khan in near future.

It is notable that the team of “Kaithi” officially announced that there will be a sequel in future. Both the films released on the same day and are being celebrate by fans of Tamil cinema.

What do you think on Atlee making Bigil’s prequel ?? Comment your views !!

Unlike other female contestants of Bigg Boss reality game show, Losliya became pretty much busy by committing projects as female lead in some of...