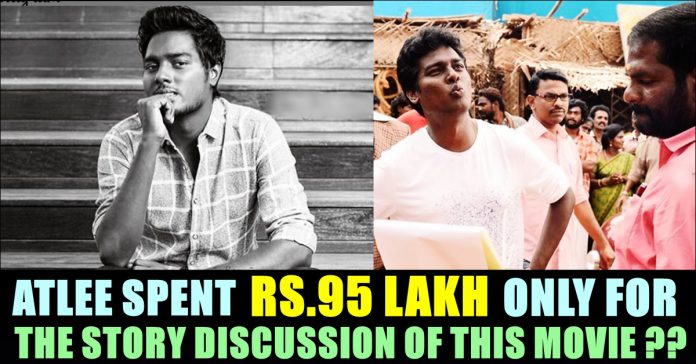 Atlee Spent Rs.95 Lakh Only For The Story Discussion Of This Movie ??

Director Atlee who rose to fame among Tamil cinema audience for his collaborations with top-tier actor Vijay, has been facing a fair amount of criticism despite of the box office success he is constantly delivering. One of the main complaint against the filmmaker that is being widely discussed is, that he is shooting excess number of footages which are not going to take place in the final output of the film and increasing the budget cost of his producers. His recent film “Bigil” which runs for 2 hours and 59 minutes said to have 3 hours and 30 minutes long runtime initially.

Now, a recent report have emerged saying that the filmmaker has spent Rs.95 lakhs just for one of his film’s story discussion. After directing 4 films in Tamil, Atlee became one of the leading filmmakers of Kollywood. Many news regarding his next venture has been surfacing. Some news portals said that he is going to direct Bollywood Badshah Shah Rukh Khan, others said that he is going to make a film with Telugu Superstar Junior NTR. However neither of them made it to the official announcement yet.

Atlee is arguably one of the most loved and hated filmmaker of Tamil cinema right now. Being a former assistant of Shankar, Atlee’s way of presenting his films and the castings he choose for the characters are considered as his major qualities. All the four films of Atlee became blockbusters despite of the plagiarism controversies. His recent release “BIGIL” has reportedly collected 300 crores in the box office. The film marks the third collaboration of Atlee with actor Vijay, after “Theri” and “Mersal”.

The latest reports of Valaipechu youtube channel said that Atlee has spent Rs.95 lakhs only for the story discussion of his cop film “Theri”. While talking about a debutant filmmaker who narrated story to both Vikram Prabhu and Sarath Kumar, the movie journalists of Valaipechu revealed it. The debutant filmmaker who initially narrated a story to Sarathkumar, later narrated the same to Vikram Prabhu and confirmed the project. Knowing about it, Sarathkumar demanded Rs.6 lakh to the debutant as a compensation for the money he spent for story development.

In a similar incident, director Atlee, before collaborating with Kalaipuli S Dhanu for “Theri”, was committed with a different production house and was involved in story discussion with his team. When the project got transferred from that production house to Dhaanu, Atlee asked the “V Creations” producer to compensate the money the previous production house spend for story development.

When Kalaipuli S. Dhaanu asked how much the amount is, Atlee reportedly asked for Rs.95 lakhs.

“Theri” became a massive box office hit and it marked the first collaboration of Atlee and Vijay. However, the film’s plot was widely compared with 1990 cop film “Chathriyan” story and screenplay of which was written by Mani ratnam.

Previous articleDinesh Karthik Stood Against Ponting To Support Ashwin In “Mankad” Controversy !!
Next articleHotel Owner Wants To Open Branch In “Kailaasa” !! Check Out His Letter To Nithi