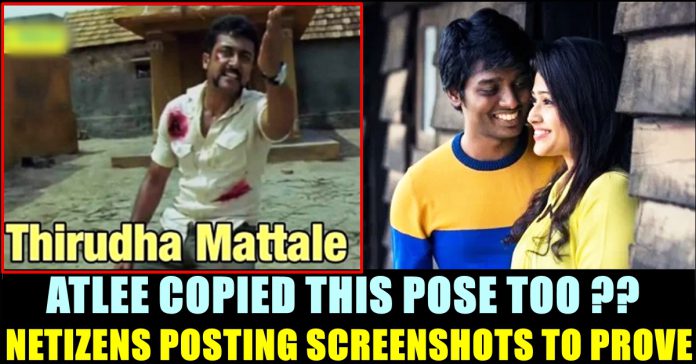 Atlee Once Again Became A Victim Of Mindless Trolls !!

Couples from all over the world posted picture with their loved ones yesterday in their respective social media accounts, in a way of celebrating the Valentine’s day. Tamil celebrities are no exception as star couples such Vignesh Shivan- Nayanthara and others posted their pictures in social media platforms to celebrate Valentine’s day.

One of the familiar celebrity couple in Tamil film industry is Director Atlee and actress Priya. The couple who were friends for a long time before marriage, got married on November 2014 and are leading a successful life since then. To celebrate the valentine’s day, Atlee posted a picture with his wife with a caption saying “Happy Valentine’s Day Priya Atlee ❤️❤️❤️❤️”

As soon as this post from Atlee surfaced, many poured wishes for the couple to be successful. However, a separate set of fans started trolling the filmmaker by comparing his picture with a post of popular cricketer Rohit Sharma with his wife. Similar post of Rohit Sharma with his wife Ritika Sajdeh was surfaced in his official twitter account on 7th of September, 2017. In both the posts, the couples were wearing black attire and the male partners can be seen wearing a black cooler.

This is us after an hour of sleep. The energy levels are clearly poles apart #SheMakesTravellingFun

Though there is 100% possibility for Atlee’s post to be a coincidence, people in social media platforms started trolling the filmmaker by comparing the old post of Rohit Sharma. Most of them who believes that Atlee was involved in plagiarism to make his movies, asked “you are copying in this too?”

Atlee is arguably one of the most loved and hated filmmaker of Tamil cinema right now. All the four films of Atlee became blockbusters despite of the plagiarism controversies. His recent release “BIGIL” has reportedly collected 300 crores in the box office. The film marks the third collaboration of the duo, after “Theri” and “Mersal”. He is often criticized for replicating the movies of ace filmmaker Manirathnam, once said that he feels proud on the fact of his movies getting comparison with cult films.

In an unexpected turn of events, a family in Sydney, Australia, became the first to win 60 years worth of pizza after meeting the...

This Is The Main Reason Behind Ajith’s Donation ?? WATCH