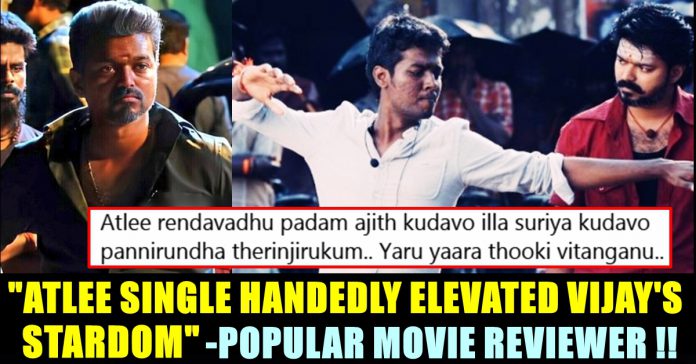 Director Atlee celebrates his 34th birthday on 21st of September with the blessings of his fans and fellow colleagues. Director Vignesh Shivan, Samantha Akkineni, Lokesh Kanagaraj, Keerthy Suresh, Arya, Amritha Aiyer and many other celebrities wished the filmmaker on his special day. Atlee is very much known for his collaboration with actor Vijay as the duo worked in three consecutive successful ventures.

Happy birthday dear @Atlee_dir 🤗 You came ,You saw ,You conquered 🔥🔥.. So proud of all of your achievements and the person you are .. god bless you with so much more 🤗

Happy Birthday to the most special person – @atlee47 sir 🎉🎉🎉 Thank you for being the same person that I saw 4 years back until now . May you be always blessed with happiness and good health 🎉🎉 pic.twitter.com/ZlFJaLBXnE

Atlee is considered as one of the most profitable filmmakers in the new era of Tamil cinema. The way he presents every film and his casting choices helped the filmmaker to become one of highest paid filmmakers of Kollywood industry right now.

Meanwhile, movie reviewer Abhishek Raja posted a tweet saying that Atlee single handedly elevated the stardom of actor Vijay through his directorials to praise him on his birthday. “Single-handedly took #Thalapathy Actor Vijay’s stardom to a whole new level.” he said in his tweet.

Waiting to see you do more 👍

Many fans of actor Vijay, including Rhevanth Charan, owner of Rohini theatre disagreed this opinion of the film enthusiast. They who believed that it is the other way around, said that Vijay played a big role in Atlee’s career. They believed that Atlee couldn’t have committed in Shah Rukh Khan’s project if he did films with any other actor other than Vijay.

Due credit must be given to #Thalapathy for having trust on the young lad ! He played a major role in this young director s career. https://t.co/xn4N3UpOsa

Atlee given memorable and unforgettable characters to Thalapathy that's it,
If not with Thalapathy Atlee will continue to direct movies with heros like Arya Vishal Jeeva etc, with Thalapathy he reached greater heights and going to make debut in Bollywood#Master pic.twitter.com/0lPHuyaxCs

That's a given when they have already worked on 3 films together. Today is the day for @Atlee_dir

Are you confusing with the OTT or theater issue factor here? #justkidding nanba https://t.co/OSGzuzASU9

Comment your views on this opinion of Abhishek !! Do you agree with him ??