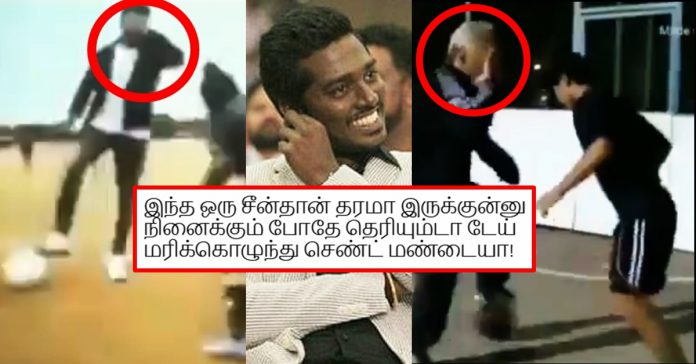 Director Atlee who is known for his collaboration with actor Vijay, is one of the highest paid directors in Kollywood. Being a former assistant of Shankar, Atlee’s way of presenting his films and the castings he choose for the characters are considered as his major qualities. All the three films of Atlee became blockbusters despite of the plagiarism controversies. His latest film “Bigil” hit the screens as Diwali release and making big numbers in box office.

When Vijay returns to his team as coach, the members of it wouldn’t like him due to his past life. Vijay, to bring them under his control, would challenge them to win him in a football match. While playing with them, the protagonist, being a former state player, would win them effortlessly. The scene was loved by the fans of the actor as he did many tricks and gimmicks while winning the girls.

Now to our shock, the exact same football moves which were did by Vijay in the “Bigil” movie, were already done by a football player, video of which is going viral in social media now. The viral video shows a football player named as sean ganier doing the same moves with his fellow football player.

The members of Tamil meme nation who witnessed the video, immediately made a video meme to troll the director of the film Atlee. Check out the video below :

Followed by this video, many of them who watched the movie started trolling the filmmaker for copying it. Check out some of their reactions below :

Earlier when the trailer released, few fans in social media accused the filmmaker for copying a scene from “Chak De India”, a 2007 blockbuster of Shah Rukh Khan. The trailer of Bigil starts with the women football team players wishing their coach, actor Vijay. When he receives wishes from Indhuja, Vijay repeatedly demands her to shout louder.

What do you think on this opinion of those fans ?? Comment your views !!

Mohan G of "Draupathy" fame took a sly dig at actor Siddharth after he slammed a BJP supporter who required condemnation from him for...