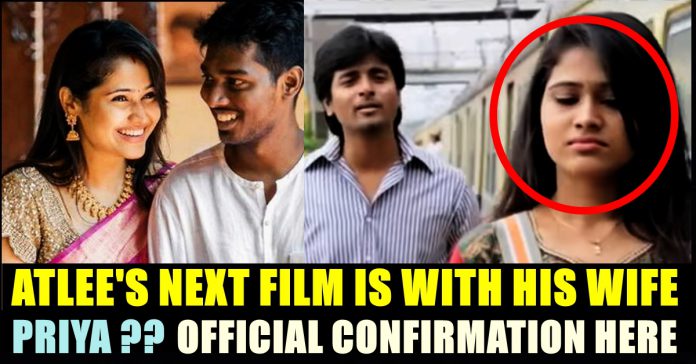 After directing 4 films in Tamil, Atlee became one of the leading filmmaker of Kollywood. Many news regarding his next venture has been surfacing. Some news portals said that he is going to direct Bollywood Badshah Shah Rukh Khan, others said that he is going to make a film with Telugu Superstar Junior NTR. However neither of them made it to the official announcement yet.

Atlee is arguably one of the most loved and hated filmmaker of Tamil cinema right now. Being a former assistant of Shankar, Atlee’s way of presenting his films and the castings he choose for the characters are considered as his major qualities. All the four films of Atlee became blockbusters despite of the plagiarism controversies. His recent release “BIGIL” has reportedly collected 300 crores in the box office. The film marks the third collaboration of Atlee with actor Vijay, after “Theri” and “Mersal”.

Now an exclusive update about his next venture has been surfaced. In a recent award function conducted by Galatta youtube channel, Atlee’s wife Priya Atlee was honoured with an award. She received “Queen Behind The Screens” award from her husband in front of many top women in Kollywood industry.

While presenting the award to his wife, Atlee announced that he will be producing a movie by having Priya in it in near future. As we all know, Priya is an actress who appeared in few films and in television shows. The school drama “Kana Kaanum Kalangal” gained her wide popularity. After that she acted in few films such as “Nadunisi Naaigal” Singam” etc. However, the actress stopped acting after marrying her long time friend and director Atlee.

Now after giving her the award, Atlee who felt happy said that he is very proud of his wife to get an award. “Every time when I get an award, she will feel proud and will hold my award with love. Now I feel very proud to hold her award” said Atlee in the ceremony.

“She did her every role in a perfect way. Sometime I would ask her what she wants to become in life. She would simply say that she wants to look after me. I know that she has a hidden talent. Definitely, she would feature in my production in future.” said Atlee.

“I know she left acting because of me. I myself asked her to act in movies if she is interested but she kept postponing and left at one stage. Her talent must get an exposure. You can expect her soon in big screen” he added.

Being one of the most paid filmmakers of Kollywood, Atlee is expected to commit in a project soon. He also answered positively to the fans of actor Vijay who demanded for a full length gangster film in Twitter. (Also Read : Atlee Just Confirmed His Next Film Vijay ??) What do you think on Priya making her come back in Kollywood ?? Comment your views below !!

For Not Capturing The Incident, Drivers Blaming That Woman IT Employee !! Watch !!

A taxi driver's selfie video before he ended his life accusing police of harassing him and citing it as the reason for his suicide...

The 99 runs partnership between Chateshway Pujara and Indian Captain Virat Kohli gave some hopes to the fans of Indian cricket team about the...