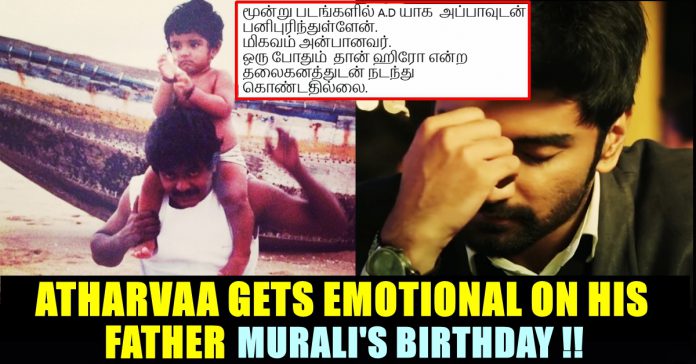 Being one of the promising young lads of Tamil film industry, Atharvaa is in his bad phase of his acting career as he recently got into controversy when Producer Mathiyazhagan of Etcetera Entertainment registered police complaint against him for causing a loss of Rs.6 crores during the release time of his movie “Semma Botha Agathey”. In Tamil, he was last seen as cop in a film named as “100” directed by Sam Anton and in “Boomerang” directed by R. Kannan. Both the films turned out to be box office dud but the actor is expected to give his come back strongly in near future with “Kuruthi Aatam” of Sri ganesh.

Now, on Tuesday, the actor came up with a tweet celebrating his father’s birthday. Murali, father of Atharvaa is a renowned actor known for some of his blockbuster movies which portrayed him as a tragic lover. He was considered as one of a very few actors of Tamil cinema who gained no haters during their prime time. “Idhayam”, Kaalamellam Kaadhal Vazhga”, “Vettri Kodikattu”, “Kanave Kalayathe”, “Dhesiya Geetham”, “Porkkalam” are few of his notable films in his acting career which spanned nearly 30 long years. Unfortunately, he left the world in the early hours of 8 September 2010 from a sudden massive heart attack in Chennai. His demise left the entire Tamil film industry in deep sorrow.

On 19th of May, Murali would have celebrated his 56th birthday if he was alive. In a way of remembering him on the special day, Atharvaa shared his childhood picture with his father by wishing him a happy birthday. Through his post, Atharvaa said that he misses him everyday. “To the coolest and the strongest person I’ve ever know . Happy birthday dad ! We love you and miss you everyday !” wrote the “Imakikka Nodigal” actor.

To the coolest and the strongest person I’ve ever know . Happy birthday dad ! We love you and miss you everyday ! 🤗✨ pic.twitter.com/jOWhjL9Mwl

It is notable that Atharvaa shared screen space with his father in his debut film “Bana Kaathadi” in which Murali reprised his iconic “Idhayam Raja” role. It was from the 1991 blockbuster film “Idhayam” in which he played a role of an introvert medical student who does not have courage to express his love to his fellow college mate.

Check out the final appearance of Murali in Tamil films here :

Director K.P Jagan who made VIjay’s Puthiya Geethai posted a tweet saying that he worked in three films of Murali as assistant director. “He never had that headweight of being a “Hero”. He was a lovable person” he wrote in his tweet.

Let us wish Murali a very happy birthday and wish for Atharvaa for a successful acting career ahead !!