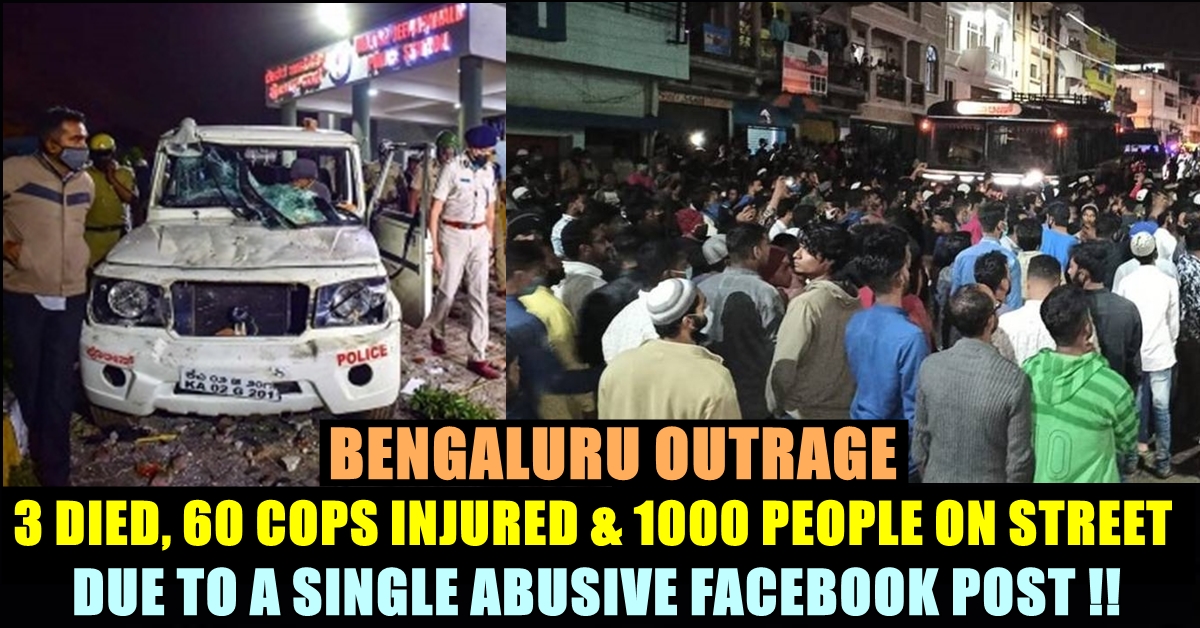 Three people killed and around 60 police personnel have been injured after violent clashes broke out in the eastern part of Bengaluru on Tuesday night over a Facebook post allegedly uploaded by a relative of a Congress MLA. The Facebook post triggered an angry mob to go on a rampage in the Kaval Byrasandra in Bengaluru to protest against it which was uploaded by P Naveen, nephew of the congress MLA R Akhanda Srinivas Murthy.

Shockingly, more than 1000 people attacked the house of the Congress MLA on Tuesday night and damaged the vehicles which were parked outside the house of the MLA. Reports emerged saying that Naveen has claimed that his account got hacked.

Rioting, violence in KG Halli, DJ Hallli over derogatory FB post by the nephew of a Cong MLA.. Nephew says his account has been hacked, MLA appeals for calm.. pic.twitter.com/S5Ge80TwUI

The crowd also tried to burn two police stations according to reports. They pelted stones at the KG halli and DJ Halli police stations. They made these attempts demanding the arrest of Naveen, the one who allegedly wrote the post. The police officials who tried to combat the violence faced severe damage that their Vehicles destroyed, according to reports. More than 100 people got arrested in the riot and 200 plus vehicles including 200 bikes torched.

With regard to incidents in DJ Halli, accused Naveen arrested for posting derogatory posts.. also total 110 accused arrested for arson, stone pelting and assault on police. APPEAL TO ALL TO COOPERATE WITH POLICE TO MAINTAIN PEACE.

In the riot that took place, Journalists were also attacked as a result of which Shivajinagar MLA Rizwan Arshad condemned the police.

@CPBlr your police hit my head with a pole even though we kept yelling we are reporters. @prajwalmanipal was hit on the back. We had to run from your police to save ourselves when there was no mob present!!

“The police cannot indulge in any highhandedness against the media, I will myself speak to the police authorities to ensure that there is no attack on media when they come out do their work. In fact, they should be given protection” the MLA said.

The incident that is happening in Kaval Byrsandra is unfortunate. I am hopeful that police will take action against all those who are responsible for this.

I also request everyone to stay calm and maintain peace in the area.

“Without choice, we were forced to fire in the air. At least 60 cops were injured” city’s police commissioner said. Meanwhile a video got surfaced in social media showing Muslim people forming a chain to save Hindu temple which was shared by Congress MP Sashi Tharoor to spread peace.

Those who incited and perpetrated the #bangaloreriots must be found, arrested & given exemplary punishment. But they are not to be equated with an entire community any more than thugs & vigilantes represent all Hindus. This also happened in Bangalore: https://t.co/TCrfo6kU7k

“Planting Tree In Your Own Villa Is Not Social Concern” – Vivekh Replied To The Criticism Faced By Vijay !!
Bank Removed Its Employee After Seeing His Tweets Against South Indians ??