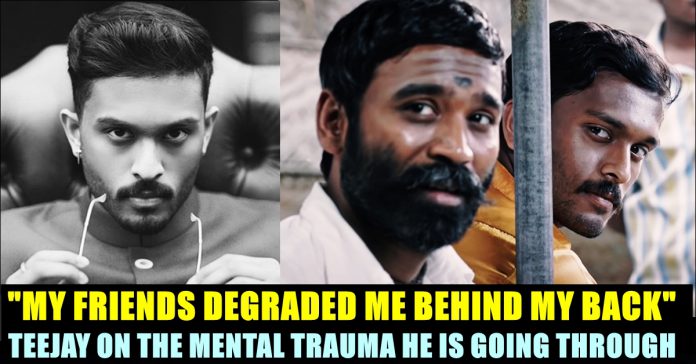 Teejay Arunasalam who is widely known by his stage name “Teejay” shared a long story through his Instagram about the importance of being kind to each other. The budding actor and popular music artist who is known for a number of his independent albums also shared about the betrayal he faced in his life. He referred the demise of 43 year old actor Chadwick Boseman who died of colon cancer and said that we people don’t know what others are going through in their life.

Teejay rose to fame among the mainstream Tamil cinema audience through his appearance in critically acclaimed filmmaker Vetri Maaran’s “Asuran” as Dhanush’s son. He got highly praised by the critics for the way he performed his role and got his face recognised among the audience.

In his recent Instagram story, Teejay said he is publicly active in social media despite of the difficult period he has been having for the past 2 years. The musician said that he wants to spread good energy through his music and performances.

Further the “Asuran” actor shared about the betrayal he faced in his life. He said that he faced people who called themselves as “friend” and appear to be very supportive. “but in reality, many have degraded me behind my back” his story read.

He further thanked his huge number of followers who are supporting him without expecting anything from him. He asked his followers not to see everything they see on social media. He reiterated the fact how Chadwick boseman remained mum about his health issue for the past four years. “He stayed silent about his health on social media and continued to enertain us all” the actor wrote.

He asked his followers and others to be kind to each other and support one another. “You do not know the underlying mental and physical health battles that people are facing and fighting against behind closed doors!” the actor stated after seeing a caption of one of his friend’s post.

Teejay initially rose to fame through his independent single “Muttu Muttu” which became an international hit. The single which was uploaded in 2013 garnered 6 million views in just 2 years. Born to a family of Indian Tamil heritage, he grew up in London, England.