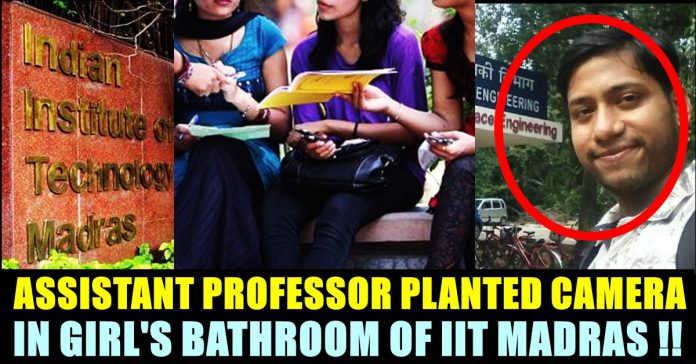 In the country where people are very much worried about women’s safety in public places, a disgraced act of an assistant professor only helped in adding fuel to it. This act of Subham Bannerji who is working in IIT madras as an assistant professor has indeed left the female students and their parents in a distressed state. The accused belongs to the Aerospace department in the IIT Madras.

The incident came to light after the cell phone which was planted in a restroom that is meant for women, caught the attention of a 30 year old Phd student. The mobile phone which was kept near the window, was on recording mode when the female student picked it up from there. She immediately rushed out with the cell phone and locked the neighbouring men’s bathroom from outside and called the security, according to sources. When the guards opened the bathroom, they found Subham inside.

Police officers immediately held the culprit who tried to film women in their bathroom and registered a case against him. According to Sun News, the accused confessed his crime to the police officers of Kotturpuram. In the investigation conducted by the police, it has been revealed that Subham was involved in such act for a very long time.

He used to keep cell phones between the water pipes of women’s bathroom to film them in an illicit way. The accused accepted that he shot videos of many women. Under the several sections of Indian Penal Code including Violence against women act, Bannerji was sent to jail as soon as he confessed his crimes. This news created huge outrage across the state where people are demanding to punish him in a most severe way.

Users of social media also expressing their anger as soon as the news surfaced :

Not many days ago, a student named as Fathima killed herself due to a similar reason. The death of Fathima Latheef, a student of IIT Madras created massive outrage in the state. 19 year old Fathima Lateef was from Kollam, Kerala, and was admitted to IIT Madras in July. She was found dead on November 9. Death of the student created huge outrage in social media as her last note stated that one of a professor, Sudharshan Padmanaban is the cause for her death.

Two year old tweet of Superstar Rajinikanth about himself announcing his political party got resurfaced and is trending in the social media platforms. In...

Director Mohan G who directed "Draupathy" revealed that no channel showed interest to buy his low budget film which turned out to be one...