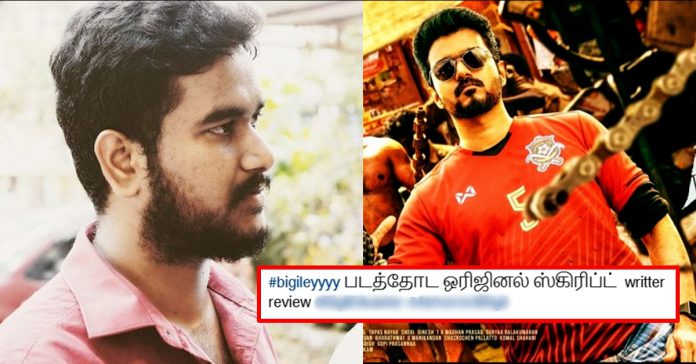 The most expected movie of the year, BIGIL released yesterday and is receiving responses from across the world. The film has actor Vijay in double role and for the first time, the actor is playing the role of a man who is in his late 50s.

The film revolves around a youngster who is an aspiring football player, diverts himself from his dream to take revenge of the murderers who killed his father. He then forms a women football team to achieve his father’s dream of providing an identity to his slum through excelling in football game.

The film which released along with “Kaithi”, is receiving mixed reviews from the audience. As the movie needs no introduction with controversies, is being criticized by separate groups as well. Now to our shock, assistant Director KP Selvah, who alleged that the story of BIGIL belongs to him earlier, has uploaded a facebook post after the release of Bigil .

Though Selvah deleted this post now, as soon as this post surfaced, Users of social media platforms started capturing screenshots and reacted to the post as well.

“I don’t intend to stop the release of the movie. I just wanted my recognition. I know the pain of standing in the office of the director regarding this issue. The way his accomplices and securities looked at me when I waited to see him, no one could feel the pain” Selvah said in one of his recent facebook post.

Since the first day of the shoot started, Thalapathy 63rd film “Bigil” made it to the headlines but mostly for the wrong reasons. Initially KP Selvah filed complaint in South Indian writers association to restrain the shoot of BIGIL for stealing his story. In some of the interviews he given to media houses, he even said that the makers tried to convince him by paying money under the desk to sort out the problem.