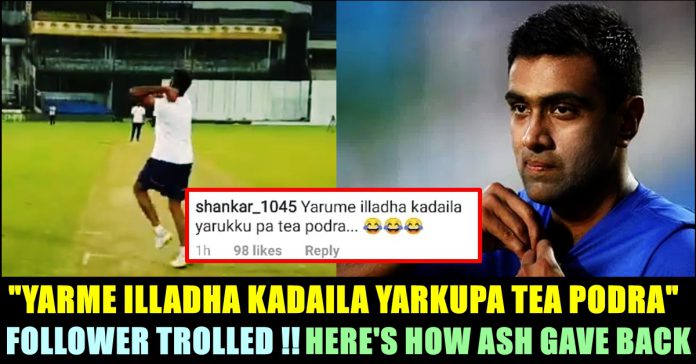 Ravichandran Ashwin is one of the many Indian cricketers who is very much active in social media platforms. Ashwin never shied away to express his thoughts in the micro blogging social media site, Twitter and in the photo uploading app Instagram as well.

Here is Ravichandran Ashwin emulating the bowling action of Sanath Jayasuriya with the pink-ball.

On seeing this video going viral in social media platforms, the cricketer who witnessed it immediately uploaded a better quality video in his official social media accounts. While uploading the video, Ashwin wrote a caption saying “Alright people !! Let’s put an end to this fun you are all having with a poor quality video being circulated on the social media. Here is a good one.😂😂😂✅”

Alright people !! Let’s put an end to this fun you are all having with a poor quality video being circulated on the social media. Here is a good one.😂😂😂✅ pic.twitter.com/LMZZBASTbc

On seeing this post of Ashwin practicing alone, one of his 20 lakh followers, reminded about a popular dialogue from a comedy scene of actor Vivek. In the comedy scene, Vivek would tease a punjabi who will be sincerely working in his tea shop with no visible customer.

By writing the humorous Tamil dialogue in the comment section of Ashwin’s instagram post , the user received more than 100 likes so far. “Yarume illadha kadaila yarukku pa tea podra… 😂😂😂” read the comment of the user.

On seeing this comment from the user, Ashwin immediately replied to him with a counter attack which obviously received more recognitions through likes from his followers. The comment of Ashwin said “don’t you make tea for yourself?? 😂😂 I certainly do”

Internet trolling is something which is almost every celebrity in the world are facing in daily basis. Some won’t mind and react to the trolls they are receiving but some will get offended and give it back to the trollers right away. But this one from Ashwin seems to be a healthy banter with his fellow Instagram user.