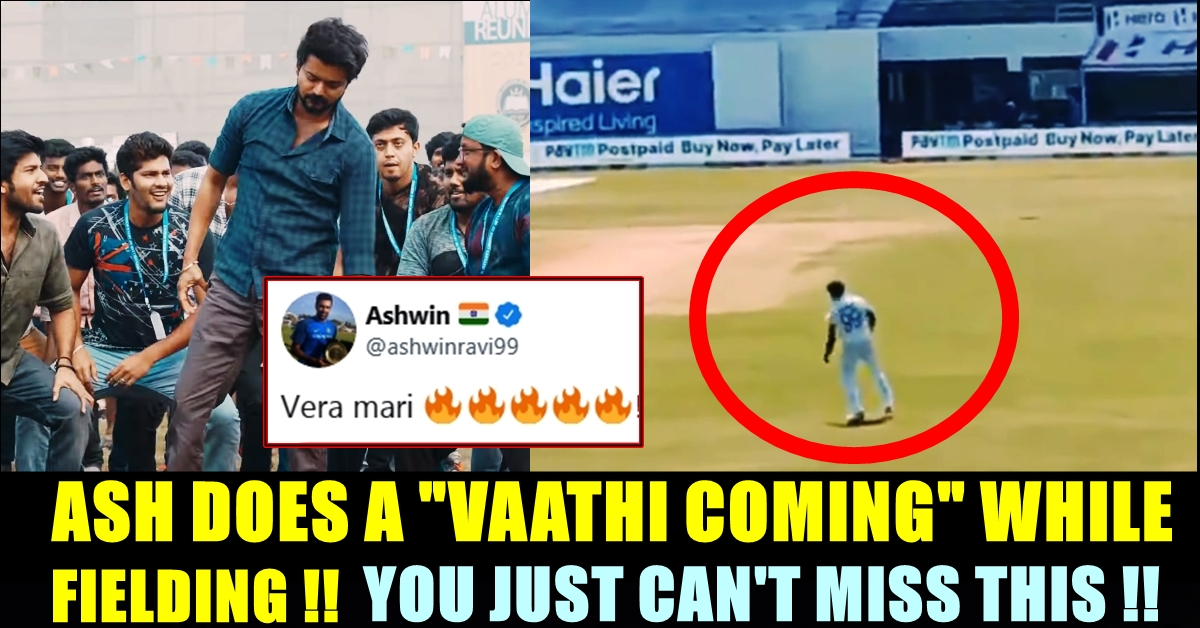 Ever since smashing a century against team England, Tail twitter is comparing Ravichandran Ashwin with “Vaathi”, character played by actor Vijay in his recently released film “Master”. Official twitter handle of IPL team Delhi Capitals uploaded a tweet morphing Ashwin with Vijay’s face and Prithi Ashwin, wife of the cricketer shared it in her official twitter account as well. Meanwhile, a video of Ashwin shaking his shoulders for “Vaathi coming” song while fielding on the third day is going viral in social media platforms with the reactions from enormous number of fans.

Ash Anna teaching 'em how it's done on a raging turner at the Chepauk 😎#INDvENG #Master @ashwinravi99 pic.twitter.com/hpO8lMCl5M

Ravichandran Ashwin became the talk of the town after delivering a terrific century in the second innings of India’s second test match against England at his home ground Chepauk, Chennai. Entire internet came up with tweets lauding the 34 year old who already claimed legend status with his batting and bowling skills.

English batsmen got out for 164 runs in the second innings and team India won the match by 317 runs. Ashwin named as the Man of the match for his 8 wickets and a brilliant century. The cricketer expressed his happiness in the post match presentation by talking in Tamil and said that he feels prouder for achieving this feat in front of his home crowd.

Now, a video of Ashwin imitating the popular “Vaathi step” to entertain the Chennai crowd is going viral in social media platforms. On seeing him moving his shoulders for the song, crowd goes gaga over it which we could evidently see in the viral video.

After watching “Master” film in Amazon film, Ashwin expressed his love towards the song and the step. Tagging music director Aniruth Ravichander and actor Vijay Ashwin wrote “Vera Maari” in his tweet. The tweet which was posted on 29th of January, garnered huge reception. It was liked by as many as 93k users and was shared 20k times by them.

While talking with Murali Karthik during the post match presentation, Ashwin said “As an eight year old I have come here on these very stands to watch cricket. I have played four Test matches here and easily this is the most special. I get a hero’s feeling here playing cricket here. In Covid times this knowledgeable crowd came out in big numbers. They were 1-0 without the crowd, and we made it 1-1 with them. Hopefully we can take it forward.” Let us wish him the very best to do well in the upcoming matches !!