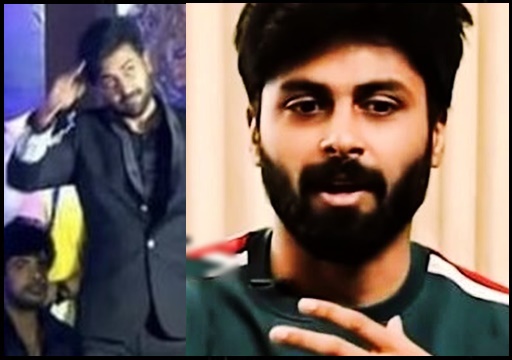 Exactly a month after the audio launch event, Ashwin kumar came up with a tweet in his official twitter handle, cherishing the support he received from his fans on that day. Adding three pictures from the event, Ashwin said that he could still the voices of his fans by adding that it was a surreal moment. He also quoted the famous saying used by Rahman on the Oscar stage “Ellaa Pugazhum Iraivanukke” (All credits goes to the God) in his tweet and the aspiring actor’s tweet became a banger with wide reach and hundreds of reactions.

“Cooku with Comali” fame Ashwin who recently caught into a controversy due to his speech in the audio launch of his debut film “Enna Solla Pogiraai”, is being a subject to online criticism. The comment made by the actor about dozing off while hearing scripts that he doesn’t like, landed him in huge trouble. Netizens made memes and trolls until the aspiring actor released a video apologizing for his speech in the audio launch.

Ashwin Kumar Lakshmikanthan who is popularly known as “CWC” Ashwin is all set to make his debut as hero in Tamil film industry through “Enna Solla Pogiraai”, trailer of which promises a triangular love story. In the audio launch event of the film, Ashwin, after seeing his fans, got excited and made a speech out of excitement.

Though Ashwin kept a full stop to the controversy through an apology, negative reports about himself such as failing to meet a filmmaker after making an appointment with him kept surfacing against him. Memes, trolls and youtube comments trolling the actor are also flooding the Internet. However, Ashwin recently hinted about his next project by uploading a story in his Instagram handle.

Meanwhile, on 5th of January, exactly a month after the audio launch event, Ashwin came up with a tweet in his official Instagram handle. “It was a Surreal moment, Could still hear those voices. Truly a radical love. #எல்லா புகழும் இறைவனுக்கே #blessed #peopleslove” Ashwin said and added the pictures of himself from the launch.

The tweet garnered various kind of reactions from the users of Twitter. With many of his followers stretching their supportive hand to him, few twitter users trolled him as well. Check out some of the reactions below :

You’re coming back champ!!!! Vaanga vaanga🔥! That day was nothing but surreal, those chants for hearing your name in it! Magical!

Bigg Boss is one of the popular Television show which is keeping the viewers of south India busy. As the Tamil version of the...