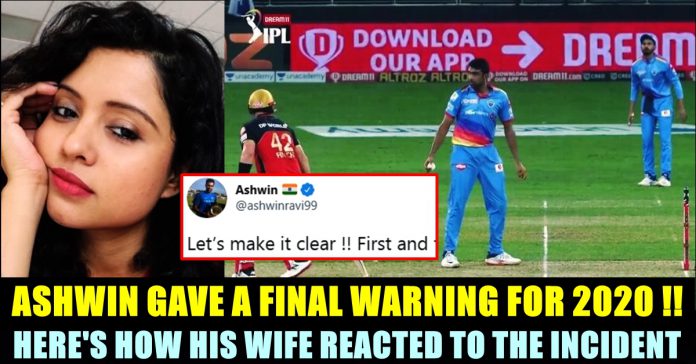 Ashwin’s Final Warning To The Batsmen Of All The Teams !!

In the 19th T20 league of IPL tournament, The Delhi capitals effortlessly restricted Royal Challengers Bangalore and won the match with a big margin. Currently, the team tops the table with 8 points. RCB lost the match by 56 runs which reflected in their run rate big time. Among Marcus Stoinis’s half century, Devdutt Padikkal’s terrific catch of Shreyas Iyer in the boundary and the poor performance of RCB batsmen, what grabbed the netizen’s attention the most is, Ashwin’s “Mankad” warning to Aaron Finch, opener of the RCB team.

The incident happened in the third over of the Royal Challengers Bangalore’s innings, when finch walked out of his crease at the non-striker’s end. The Delhi Capitals off-spinner Ashwin who is very well known for re-inventing the “Mankad”, looked at Finch and allowed him to return to the crease.

Many speculations did rounds in the Internet with reactions speculating the reason behind this act of Ashwin. Few of them thought that Ashwin didn’t do this due to Ricky Ponting’s advice who earlier said that it spoils the spirit of the cricket. On seeing his warning, Ashwin’s wife Prithi Ashwin, posted a tweet in Tamil, writing “Adrasakka.” to express her emotion.

Now, after winning the match, the Tamil nadu based cricketer came up with a tweet saying that this is his final warning for 2020. He asked public, critics and cricket fraternity, mainly Ricky Pointing not to blame him, if he gets a batsman out in future through “Mankad”. The cricketer also added that he is a good friend of Aaron Finch.

“Let’s make it clear !! First and final warning for 2020. I am making it official and don’t blame me later on. @RickyPonting #runout #nonstriker @AaronFinch5 and I are good buddies btw.” his tweet read.

Let’s make it clear !! First and final warning for 2020. I am making it official and don’t blame me later on. @RickyPonting #runout #nonstriker @AaronFinch5 and I are good buddies btw.😂😂 #IPL2020

Prior the tournament, Ponting who felt that it is not within the “spirit of the game” said that he will have a chat with the cricketer first. “I’ll be having a chat with him about “Mankading”, that’s the first thing I will do. That is going to be a hard conversation that I will have with him. I think. he will say that was within in the rules and he’s right to do it” said Ponting who added that it will not happen in his team.

Comment your views on this final warning of Ash !!

Due to the increase in COVID 19 cases, The Tamil nadu government has announced a new set of restrictions on Thursday. The restrictions includes...