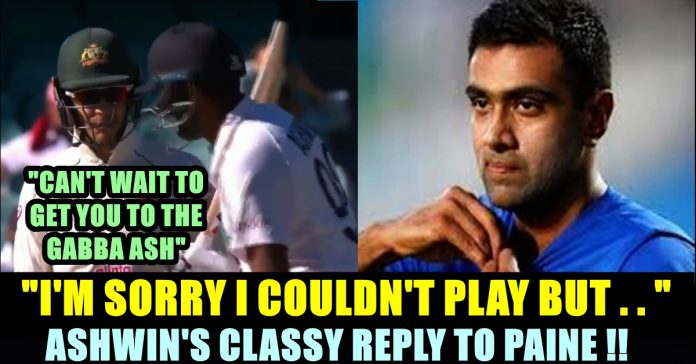 Ravichandran Ashwin’s first tweet after winning the test series rocking the internet as the cricketer gave an epic reply to former foreign cricket players who believed India couldn’t bounce back in the test series against Australia. The cricketer, by adding the pictures of cricketer’s making their opinions against India and India celebrating the victory, said that left hand side is not equal to right hand side.

India won the series against Australia by chasing 328 runs in the second innings. With the help of Pant, Pujara, Gill’s heroic batting knocks, team India managed to chase the mammoth total with three overs left in the day. The historical victory made fans extremely happy who are lauding Ajinkya Rahane for captaining the team effectively. “Every session we discovered a new hero” said Sachin Tendlukar lauding the team’s memorable victory.

Ravichandran who couldn’t play the fourth test due to injury, saved team India from losing the match in the third test. He who stood in the crease for 4 long hours without getting out, impressed the entire country. His bowling abilities also paved way for team India’s victory in the second test.

Now, by adding the picture of former Australian cricketers making comments against India, Ravi Ashwin sent a message to his followers and the fans of Indian cricket team. In the picture we could see the statements of cricketers such as Ricky Ponting, Vaughan, Haddin, Clarke and Waugh.

“There could be a good chance (of a whitewash)… With Kohili not being
there.. there’s almost no one to pick them up after a loss like that” said Ricky Ponting after India got defeated in a most humiliating way in the first test. “Can you imagine this Indian batting line-up chance without Virat Kohli for the next two Test matches? They are in deep trouble” said Michake Clarke former Australian captain.

“Told ya. India are going to get hammered in the Test Series” former English batsman Vaughan said.

Now, reply to these comments, Ravichandran Ashwin said “LHS ( not = ) RHS ! Yours happily India tour of OZ 2020/21 Humbled by all the love and support we have received over the last 4 weeks!” by adding a picture of India celebrating.

Humbled by all the love and support we have received over the last 4 weeks!🙏 pic.twitter.com/nmjC3znglx

The cricketer also replied to Tim Paine who passed nasty comments while he was batting in the third test. He said “Can’t wait to get you to the Gabba” referring to the Brisbane test. Replying to him, Ashwin replied “Can’t wait to get you to India, that will be your last game”. Further he continued to sledge the Tamil nadu cricketer for a long time which frustrated him.

This is where Tim Paine and the Aussies lost the whole damn series 💉💉 pic.twitter.com/Zr2TV1pK2E

Now, replying to this behaviour of the Australian captain, Ashwin came up with a tweet writing “Good evening from Gabba!! I am sorry I couldn’t play here but thanks for hosting us and playing some hard cricket during these tough times. We will remember this series forever!”. He tagged Time Paine in his tweet.

Good evening from Gabba!! I am sorry I couldn’t play here but thanks for hosting us and playing some hard cricket during these tough times. We will remember this series forever! @tdpaine36 @CricketAus

This tweet garnered huge reception with replies lauding the all rounder for finishing it off in style. “Classy af, Ash anna! No matter how low they stooped, you guys have never gone down and gave them one classy response after another, both on and off the field.” wrote a follower to sum up the entire rift.

Top Celebrities Reaction For “SARKAAR” First Look Release !! : Can’t Get Better Than This !!

Following the commercial success of ‘Mersal’, Vijay teamed up with director AR Murugadoss for the upcoming flick, which is currently underway. While the makers...

Actor Ajith Kumar's highly anticipated film was titled as "Valimai". The film which s going to be directed by H.Vinoth who did his last...