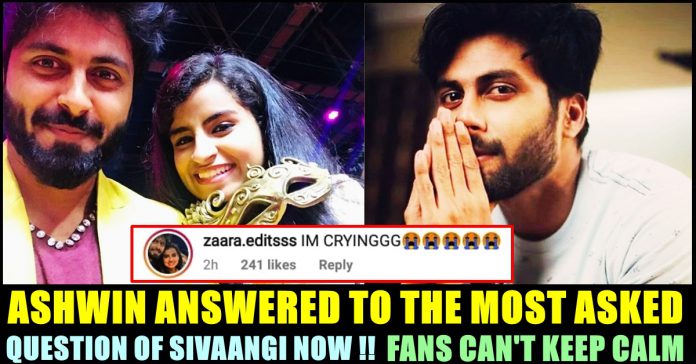 As the most celebrated “cooku with Comali” show reached its end, Ashwin, one of the most loved contestants of the show penned an emotional note to the crew of “Cooku with Comali”. He also sent a special message to Sivaangi and won the hearts of the show’s audience. “Bigg Boss” fame Kavin, “Bigil” fame Reba John commented on the heartfelt post of Ashwin along with thousands of fans and followers.

Ashwim Kumar of “Cooku with Comali” show gained a separate fan base through his participation in the cookery show. After acting in a number of TV serials, Ashwin got an opportunity to take part in the reality game show of Vijay Television. Many people, especially girls started loving him for his charming looks and calm attitude. The combination of himself with Sivaangi has a separate fan base which is evident through the comments that are surfacing in social media platforms.

Ashwin who rose to fame through his participation in the show, uploaded an emotional post as the show reached its end. He who is enjoying nearly 2 million followers in Instagram, said that the special moments he had in the show will be etched in his memories. He said that it is not “Cook with Comali” but “Cook with Family”.

The aspiring actor said that the show gained him the recognition that people like him can only dream of. He who couldn’t believe that the show got completed, said that he is ready to leave all of his assignments to spend time with the CWC 2 team in the future and thanked the technicians who made the show go sensational.

He also thanked the fans of the show for pouring immense amount of love. “I hope the love and support continues forever to each and every contestant and pairs of this show❤️” said Ashwin and went on to add a special mention to Sivaangi.

Through his post, Ashwin credited Sivaangi for bringing the fun side of him and mentioned that she is the first one who made him feel comfortable. “It was you, who first made me comfortable, brought out the fun side of me and projected me the most. To that one question you keep asking ‘Will you miss me?’ Yes!! you will be missed the most 💜” the post he wrote read.

Lakhs of fans got overwhelmed by this post of Ashwin and thousands of them expressed their emotion through comments as well. Sivaangi dropped a comment writing “Mannaa” whereas many other celebrities and fans expressed their love in various ways.

Previous article“Blue Satta” Maaran’s Movie Got Banned By Censor Board For This Reason ??
Next article“Don’t Compare Me With Sivaangi” – TV Actress Neha Of “Bakkiya Lakshmi” Fame Replied To Insta Users

After losing a thrilling IPL 2019 Eliminator to Delhi Capitals, Sunrisers Hyderabad captain Kane Williamson rued the team's inability to close out games through...

Doctors, Politicians and every other influential personalities in Internet are requesting people to stay at home to prevent the spread of COVID 19 virus....