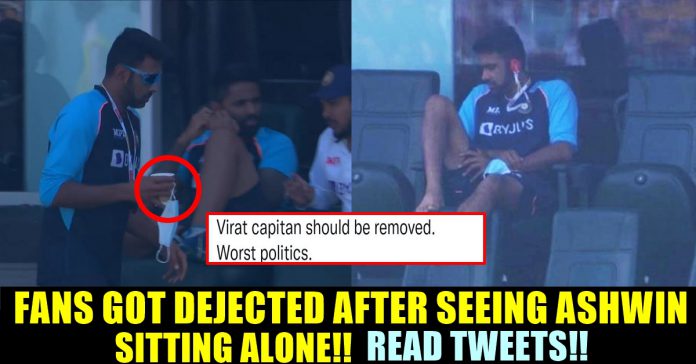 Ravichandran Ashwin, the world-class spinner was not included in the playing eleven. This has dejected the cricket fans and even the cricket experts. Everyone has been dissecting the reasons for not selecting the eminent bowler. People were upset with the Indian Team Captain Virat Kohli and the coach Ravi Shastri for excluding R. Ashwin.

India Versus England Test Series is going on in England. The teams are in close quarters. The first match was a draw. In the second match, India won. In the third match, England won the match. Ashwin was not included in the previous and ongoing test matches. This has been criticized by many people. Especially because at The Oval, the venue of the ongoing match, spinners could take more wickets.

Amidst this, an image of Ashwin sitting alone in the stadium was circulated online.

Fans aggrieved at not including Ashwin in the team have been showing their discontent online. People have compared the players playing currently with R. Ashwin’s performances.

when someone’s ego is more than anything then these things happen.. hope in near future, Indian cricket team will have a new more deserving captain.
“stop ruining team with ur ego”#Ashwin#ViratKohli

Seeing the condition of the pitch now, India will be dearly dearly missing Ashwin. Not selecting him will go onto hurt India it seems. #ENGvIND #Ashwin #IndvsEng

#ENGvIND Flat track and it’s not gonna be easy for #india to win this without #Ashwin!!! They will struggle big time! Bad team selection by #Kohli and #RaviShastri!!!

With Thakur scoring runs down the order, #Ashwin can easily replace Jadeja in the side.#INDvENG

When every team mates leaves u alone in your life because of afraid team captain who may drop you if you make friendship with him .. A great pain behind no.2 Bowler in the icc ranking. #IndvsEng #AskTheExpert #RishabhPant #ashwin @vikrantgupta73 pic.twitter.com/8UYH8MCuWM

Previous articleDirector Shankar’s Daughter Debuts As Heroine Through This Film !! Filmmaker Tweeted
Next articlePolimer News Getting Trolled After Streaming The Off Screen Activities Of Their News Reader By “Mistake” !!