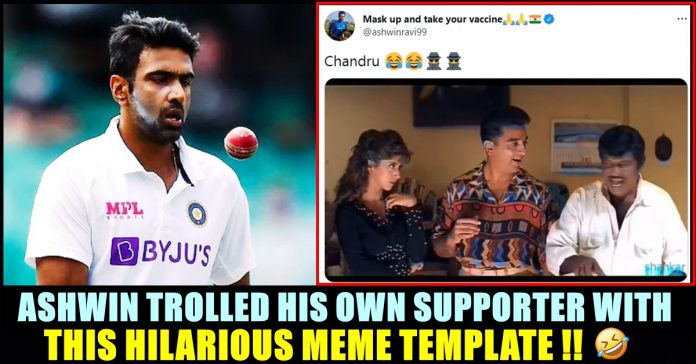 Indian spinner Ravichandran Ashwin who recently made headlines after replying to Sanjay Manjrekar’s remark with a meme template, again came up with a meme to troll his buddy and former South Africa Team’s Performance analyst Prasanna Lara. He recently had an argument with former England batsman Kevin Pietersen supporting Ashwin and changed his stance after seeing one of the replies of Kevin. Ash who was watching the whole conversation, trolled Prasanna by using the popular meme template from “Indian” movie.

In the ongoing World Test championship final, one of the commentators made a remark on Ashwin’s bowling. He seemingly said that there is no spin, no mystery in Ashwin’s bowling and expressed his opinion of whacking Ashwin from the team. After Ash causing the first break through in New Zealand’s batting innings, Prasanna who is known among Tamil online users for appearing with Ashwin in the videos of Ravichandran Ashwin youtube channel, wrote “A Commentator just said no spin no mystery whack Ashwin and that results in first breakthrough” in his first tweet.

This tweet grabbed the attention of Kevin Pietersen himself and the former English batsman came up with a reply saying “P – it doesn’t mean what we said was wrong. It was right! If execution isn’t right, that’s a different matter!”

P – it doesn’t mean what we said was wrong. It was right! If execution isn’t right, that’s a different matter!

“I never said it was wrong by any means brother and moreover it was the commentator I was asking the question. I just gave my opinion on taking a bowler lightly who has 400 plus test wickets at an impressive strike rate.” Prasanna replied to which Kevin replied back saying that it doesn’t matter how many wickets a bowler has taken and said that it all depends on that particular situation.

It doesn’t matter how many wickets a bowler has taken, bud. It’s about the situation of the game at that particular point.
No spin, no mystery at the time & you know what I would have done….! 🤣

Reacting to this tweet, Prasanna said that he wouldn’t have had a difference of opinion if it was said by him and referred to one of his best batting performances. He further said that Kevin dominated spinners all over the world and he has the rights to have a take on them. Pietersen ended the conversation by replying back with a “laugh” and “heart” emojis.

Ravichandran Ashwin who was reading the whole conversation between Kevin Pietersen and Prasanna Lara, saw the flip made by Prasanna and didn’t fail to expose it to his 10 million plus twitter followers. He replied to Prasanna’s tweet with a popular scene from Indian movie where Goundamani would troll Kamal saying “Inga Chandru nu oru maanasthan irunthaan, avan enga nu thedren” (I am searching for that honest man Chandru who was here a while ago)

Check out the reply of the cricketer below :

As far as the finals is concerned, the most awaited match of the year is heading towards a draw with two complete days getting washed out without play due to rain interruption. Ashwin dismissed Tom Latham while he was batting at 30 and caused a massive break through for India. Play on the reserve day is expected to take place.

Video Of A Youth Threatening A Cop Inside Police Station Created Outrage !! WATCH

Video of a youth threatening a police officer named Sathish and inviting him for a wrist fight is going viral in social media platforms....

The film “Capmari” released recently and shocked the fans of Tamil cinema for its adult content and double meaning dialogues. What’s more shocking is...

Ravichandran Ashwin who is about to claim legend status in the history of Indian cricket, is pretty much known for the interest he shows...