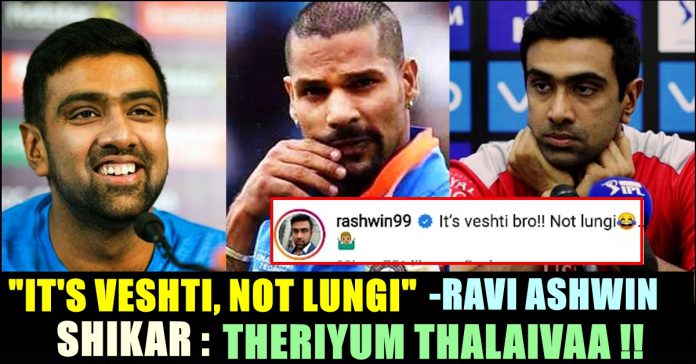 Ashwin Ravichandran who is very much busy in India-west Indies series is also pretty much active on social media. We could often find his name in the comment sections of the social media posts of his teammates. Most of the time he would try to make fun of them according to the bond he have with that particular colleague.

This time, Shikar Dhawan, the Indian opener caught the attention of Tamilnadu bowler for his new Instagram post. Unlike his previous posts, Shikar, tried South Indian style of attire in the post. In the post he added a caption saying “ Mundu Dhamaka, South Indian Pataka! #SouthKaGabbar“

In this post, for mentioning Veshti as “Mundu” ( Lungi), R Ashwin with laughing emoji said “It’s veshti bro!! Not lungi😂.. 🤷🏼‍♂️” to which Shikar politely said that he said “Lungi” because he is in Kerala. He also amde sure that he would mention it as Veshti if he comes to Chennai. He also kept Ravi Ashwin calm by calling him as “Thalaiva” in the end of his reply.

“hahhaha its Mundu in Malayalam bro!! When i am chennai then will put Veshti . Thailava 😉😎👊🏼” his reply read. Check out the screenshot of their conversation here :

Ashwin also seen spending time with Ajinkya Rahane and Chatteeshwar Pujara with whom he has been making cheeky tweets for the past two day.

This post is just to show that @cheteshwar_pujara had the nerve to edit the point I took and managed to squeeze in the next point. The mean white walker!! 😂

Ravichandran Ashwin is one of the many Indian cricketers who are very much active in social media platforms. Ashwin never shied away to express his thoughts in the micro blogging social media site, Twitter.

On the profession front, Ravichandran Ashwin is all set to turn out for a new franchise in the next season of IPL after Kings XI Punjab decided to release the all-rounder. Delhi Capitals has apparently pipped Sunrisers Hyderabad in roping Ashwin in for IPL 2020.

“Ashwin’s release approval is already with the BCCI and an announcement is likely soon. Delhi Capitals showed interested in him and KXIP, after thinking it through, felt they needed a younger spinner in the squad,” a source close to the development told PTI.