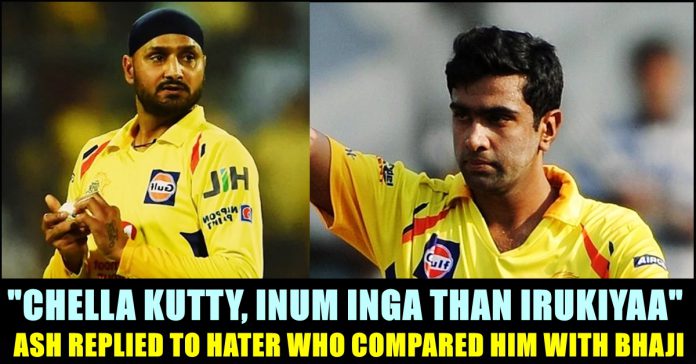 To a hater who constantly criticized him blaming the pitch, Ravichandran Ashwin gave him a fitting reply referring to an old incident. Nibraz Ramzan whose bio says that he is an administrator at Daily cricket Sri lanka, said that Ashwin would take 17 wickets in the next match if he bowls in a similar pitch and would surpass Harbhajan singh’s all time test wickets. Replying to him, Ashwin referred to a previous incident where he trolled him for not watching a match properly and making inappropriate comments regarding it.

After having a successful match which gifted him 400 and 600 mark in test and overall international cricket respectively, Ravichandran Ashwin has been responding to the wishes of experts in Twitter. He replied to sachin Tendulkar, Virender Sehwag, Suresh Raina, Angelo Mathews, Dinesh Karthik, Chateshwar Pujara, Yuvraj Singh, Harbhajan Singh, Gautam Gambhir, Rohit Sharma, Rishabh Pant and many others celebrities from various industries.

Meanwhile, a twitter user named Nibraz Ramzan, constantly spewed hatred at Ravichandran Ashwin and the achievements he made in the third test. “Had Murali & Saqlain played More Tests in India, They would have easily crossed 1500 Wickets !!” he said in one of his tweets and said that Ashwin would take 17 wickets in next match surpassing Harbhajan singh if he plays in a similar pitch in next match.

Had Murali & Saqlain played More Tests in India, They would have easily crossed 1500 Wickets !!#INDvEND #Cricket

If next #INDVENG test played in a similar kind pitch, @ashwinravi99 might leapfrog @harbhajan_singh ‘s 417 Wickets in the next game itself 😀😀

In the year 2016, when the twitter user made a baseless comment, Ashwin replied to him saying that he should watch the match properly before making wrong conclusions.

Check out the screen shot of the old reply of Ashwin to Nibraz that was made on 15th of April 2016 below :

To all those who are making comments against the pitch to demean the victory of India, Ravichandran Ashwin came up with a series of tweets explaining how people are trying to sell their ideas to others through “outbound marketing”.

“you can’t think on your own” and here we will teach you how to think and also help you think the way we want you to think. After having played the game at this level for a decade, I can safely say that “As long as we are going to buy it, they will shove it down our throat”.

Ashwin became the second fastest bowler to pick up 400 test wickets with having legendary Sri lankan spinner Muttaiah Muralitharan ahead of him. The Chennai based cricketer took 77 test matches to achieve the feat whereas the Tamil speaking Sri lankan cricketer picked up his 400th wicket in his 72nd match. Entire Internet, along with experts and celebrities from several other industries lauded the cricketer for this achievement of him.

Couple Got Married Through Video Call Due To Lockdown !! WATCH

This lockdown has taught us many things such as maintaining social distance, surviving with limited budget, spending time with our loved ones without seeing...