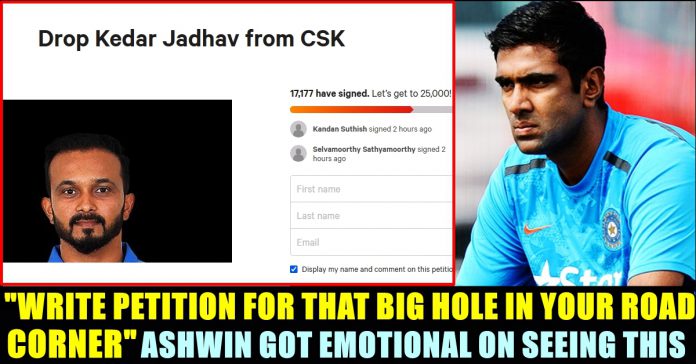 On seeing the outrage received by Kedar Jadhav for past few days, Ashwin, in his official youtube channel, has made a statement slamming people who are not caring to sign petition for the social issues but doing it to remove a sports player from his team. He said that people are being hypocrite in this case as they are raising voice for “Mental health” when someone dies of depression and trolling individuals and affecting their “Mental health” when they fail to perform well.

In the last match Chennai Super kings played, they lost to Kolkata Knight riders and the middle order batsmen of the yellow team subjected to severe online criticism. While chasing 168 runs, Dhoni tried to hit Varun Chakravarthi for a biggie and completely missed the ball and got bowled which caused Kedar Jadhav to make his presence in the middle to bat. When he came to bat, CSK needed 39 runs from 21 balls and he played a solid defence in the very first ball he faced. No runs came in the next two balls as well.

CSK team which scored 90 runs in the first 10 overs, lost the match by 10 runs with Jadhav and Jadeja playing in the middle. Jadhav scored 7 runs from the 12 balls he faced and Jadeja made 21 runs from the 8 balls he faced. In the fourth league match played by CSK, Jadhav faced 10 balls and scored just 3 runs which costed CSK the match as the team lost the game with just 7 runs difference. The middle order batsman of the yellow team, scored 58 runs in the 4 innings he played for CSK in this ongoing tournament with an average of 14.

Fans who questioned the team management why they are still giving opportunity to the 35 year old, started a campaign to remove Jadhav from CSK team after seeing performance in the last match. So far 17,000 plus people signed the petition to remove the cricketer from CSK team. “Kedar Jadhav hasn’t been performing at all but he’s in the playing 11, please sign this petition to drop that useless, Spineless and stupid Jadhav from the team.” the petition reasoned.

Reacting to this activity of the CSK fans, Ashwin said “He too have friends, family and parents. There is a limit for everything. Lot of issues in our place needs to be addressed rather than this. There is a huge hole in the road corner. People didn’t care about it. An old man will be laying in platform for a long time. We won’t know whether he is alive or dead. People won’t sign petition for that. Garbages would keep falling in road from the garbage truck. But people are signing petition to remove Kedar Jadhav,” Ashwin said. “He reached there amidst the COVID situation. I feel there should be some sensitivity in it” he added.

Comment your views on these statements of the West mambalam based off spinner !!