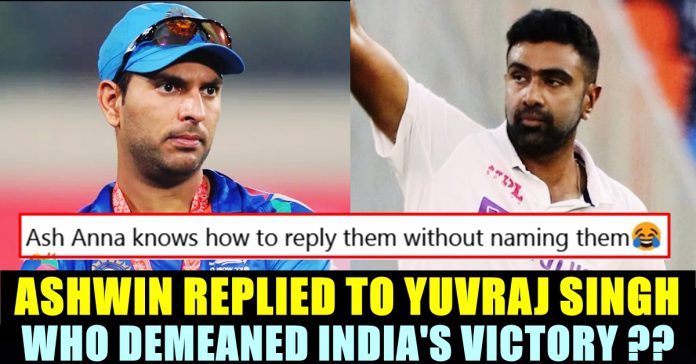 Ravichandran Ashwin who achieved the milestone of picking 400 wickets in test cricket in the third test against England, came up with a series of tweets explaining how ideas are being sold using “outbound marketing” like products. The cricketer said that the “choice of buying the ideas is ours” through his tweets and it is highly believed that what Ashwin said is a response to a tweet uploaded by former Indian all rounder Yuvraj singh. The cricketer said that Harbhajan and Kumble could have picked 1000, 800 wickets in the pitch team India bowled on Day 2.

Ashwin became the second fastest bowler to pick up 400 test wickets with having legendary Sri lankan spinner Muttaiah Muralitharan ahead of him. The Chennai based cricketer took 77 test matches to achieve the feat whereas the Tamil speaking Sri lankan cricketer picked up his 400th wicket in his 72nd match. Entire Internet, along with experts and celebrities from several other industries lauded the cricketer for this achievement after he made England’s Jofra Archer out.

Now, the cryptic tweet uploaded by the all rounder says “Products are sold using various marketing strategies and that’s an accepted practice! We now live in an era where ideas are also being sold to us and it’s a classic example of “outbound marketing”, however I would like to add that buying ideas being sold to us is like telling us “you can’t think on your own” and here we will teach you how to think and also help you think the way we want you to think. After having played the game at this level for a decade, I can safely say that “As long as we are going to buy it, they will shove it down our throat”.

In his third tweet, the cricketer said “Finally. We can always have and stand by our opinions even if it’s against the majority as long as we know that it is our own and not the one that’s been sold to us! “The choice is always ours”

Many fans got confused while trying to decode the tweet uploaded by the Chennai cricketer. However, majority of the concluded that the tweet is a response to Yuvraj singh who, in a way, demeaned the cricketer’s achievement through one of his tweets.

I am quite surprised to see yuvi pajii comparing every achievement with his generation. Ash Anna prove them wrong . Break the record of ( you know who) and shut their mouth. And yes you are not ageing. 🧡

Ash Anna knows how to reply them without naming them😂👏

They wanted to sell idea (about pitch of yesterday's match)

Ashwin bodied clown yuvraj who was worst test player with average 39.yuvraj forgot how to behave like senior because ashwin ended his friend harbhajan career.yuvraj is just jealous of ashwin achievement.

The cricketer’s tweet also answers to the experts who were trying to sell the idea of Motera pitch is “poor” after the batsmen of team England lost their wickets in regular intervals. Comment your views on these tweets of the 34 year old cricketer !!

Previous articleGirl Shared About The Horrific Experience She Went Through After Ordering Food In Swiggy !!
Next articleTN Chief Minister Waived Off Jewel Loans Obtained By Farmers Through Cooperative Banks !!

A.R Murugadoss Warns The Junior Artists Of “SARKAR” Who Are Giving Interviews About Film’s Scenes !!

Vijay's upcoming film Sarkar, produced by Sun Pictures, is in the post-production phase and will hit the theatres on Diwali 2018. On October 2,...

Mystery spinner Varun Chakravarty got selected for team India after impressing the selectors and fans with his performance in the ongoing IPL tournament. The...