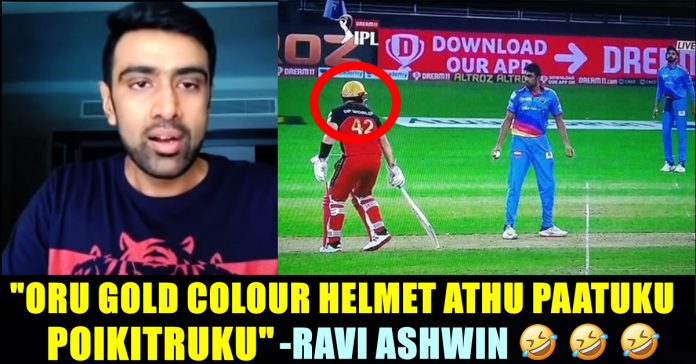 Ashwin who grabbed the headlines on Tuesday by warning Aaron Finch for going past the crease before delivering the ball. When media and fans are speculating a rift between Ashwin and Ponting, the cricketer came up with a video in his youtube channel, narrating the incident in the most hilarious way. Ashwin referred a popular Tamil movie comedy to explain the incident.

In the 19th T20 league of IPL tournament, The Delhi capitals effortlessly restricted Royal Challengers Bangalore and won the match with a big margin. Currently, the team tops the table with 8 points. RCB lost the match by 56 runs which reflected in their run rate big time. Among Marcus Stoinis’s half century, Devdutt Padikkal’s terrific catch of Shreyas Iyer in the boundary and the poor performance of RCB batsmen, what grabbed the netizen’s attention the most is, Ashwin’s “Mankad” warning to Aaron Finch, opener of the RCB team.

The incident happened in the third over of the Royal Challengers Bangalore’s innings, when finch walked out of his crease at the non-striker’s end. The Delhi Capitals off-spinner Ashwin who is very well known for re-inventing the “Mankad”, looked at Finch and allowed him to return to the crease.

Now, narrating the incident in his Youtube channel, Ashwin said that he guessed that someone will go past the crease as soon as seeing the large ground. “To hit boundaries in that ground, a batsman need guts. That team had batsmen who would try two runs often as well. I thought that someone will do that mistake. Finch went as I guesses” said Ashwin.

“I was about the bowl the ball. After taking the run up, just before going for the jump, a golden color helmet was floating ahead of me.” said Ashwin in a hilarious way by referring a popular Tamil film comedy.

“He still didn’t reach his crease and kept staring at me. Then I left it as a final warning as he was a good friend to me when I was playing for Kings 11 Punjab.” Ashwin said. “As the dialogue in Ramana film, punishments should get severe. If they deduct 10 runs for these kind of breach, batsmen would follow it” he added.

While talking about his interaction with Ponting after that incident, Ashwin said that Ponting wanted him to get Finch out as he went way too far off the crease before the ball was delivered. “He further said that breach is a breach, no matter who committed it. He is also approaching ICC to put penalty for such incidents” said Ashwin.

Prior the tournament, Ponting who felt that it is not within the “spirit of the game” said that he will have a chat with the cricketer first. “I’ll be having a chat with him about “Mankading”, that’s the first thing I will do. That is going to be a hard conversation that I will have with him. I think. he will say that was within in the rules and he’s right to do it” said Ponting who added that it will not happen in his team.

However, after the incident, Ash came up with a tweet saying that it is final warning for 2020 and tagged Ricky ponting.

Let’s make it clear !! First and final warning for 2020. I am making it official and don’t blame me later on. @RickyPonting #runout #nonstriker @AaronFinch5 and I are good buddies btw.😂😂 #IPL2020