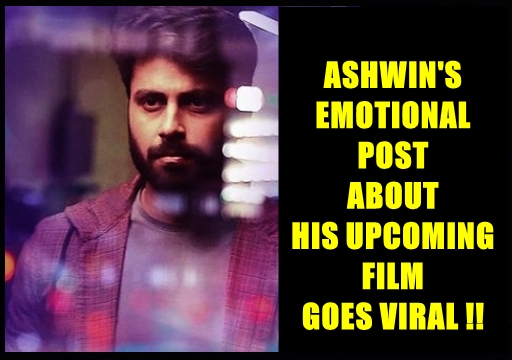 Ashwin Kumar Got Emotional After The Release Of His First Film Got Postponed !!

“Cooku with Comali” fame Ashwin who recently caught into a controversy due to his speech in the audio launch of his debut film “Enna Solla Pogiraai”. The comment made by the actor about dozing off wile hearing scripts that he doesn’t like, landed him in huge trouble. Netizens made memes and trolls until the aspiring actor released a video apologizing for his speech in the audio launch. Now, days after the audio launch day, Ashwin came up with an emotional post, reacting to the delay of his first film’s release.

Ashwin Kumar Lakshmikanthan who is popularly known as “CWC” Ashwin is all set to make his debut as hero in Tamil film industry through “Enna Solla Pogiraai”, trailer of which promises a triangular love. In the audio launch event of the film, Ashwin, after seeing his, got excited and made a speech out of excitement.

Now, days after the incident, Ashwin came up with a story in his Instagram handle, reacting to the delay of the release of his debut film. Initially, the film was planned to hit the screens on 24th of December as a Christmas release. Now, it got postponed to release during next year due to unkown reasons.

Reacting to the same Ashwin, came up with a post in his official Instagram handle, writing “I HAVE WAITED LONG FOR MY DEBUT FDFS AND IT’S GETTING EXTENDED PULLING MYSELF TOGETHER WITH WHATEVER IS LEFT OVER. WORKING TO COME BACK STRONGER AND GIVING MY BEST IN ENTERTAINING ALL OF YOU. LOOKING FORWARD TO MEET YOU SOON IN THE THEATRES” in his story.

“From No where to here”, “Believing in destiny” are the hashtags added by the aspiring actor in is story. Here’s the screen shot of it : 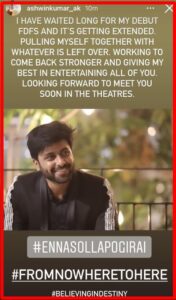 Previous article“Do You Watch Cricket ?” Young Kid Asked This To CSK’s Expensive Cricketer !! You Just Can’t Miss His Reply
Next articleFamous Actress Condemned Karnataka MLA For His Joke On “R*pe” !!

Actress Kushboo Made Effort To Solve The Issues Of Bigg Boss Season 2 Tamil !!

The Film Employees Federation of South India is upset with the producers of Kamal Haasan’s Bigg Boss 2 as they are using nearly 75%...