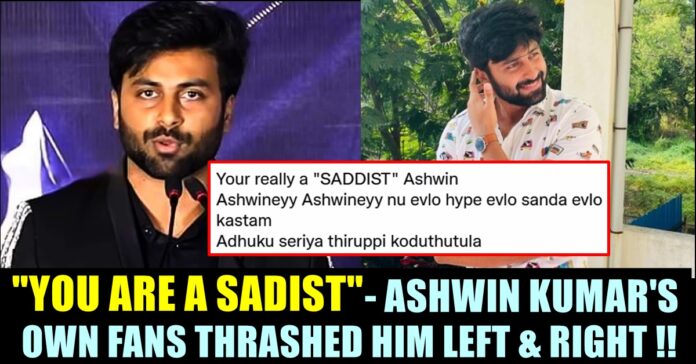 Ashwin kumar of “Cooku with Comali” fame, on Wednesday, uploaded a tweet thanking his fans for supporting him during his hard times. However, most of his fans who reacted to that tweet, questioned him about why he blocked most of his fans and few expressed their displeasure as well.

The youngster who started his career by acting in serials and advertisements, rose to fame and became a household name after participating in the cookery show “Cooku with Comali”. After gaining so many fans and followers through the show, Ashwin committed to play lead role in a film named “Enna Solla Pogirai”, a film based on triangular love.

Now, he is currently working on a project of ace filmmaker Prabhu Solomon titled “Sembi” promotions of which started already. On Wednesday, Ashwin came up with a tweet saying ““MYPEOPLE” you all never failed to amaze me. Thanks for the unconditional love🤍😇🙏🏻 #Myvoice #Myhope #Mypeople”

“MYPEOPLE” you all never failed to amaze me. Thanks for the unconditional love🤍😇🙏🏻 #Myvoice #Myhope #Mypeople

Most of the reactions that surfaced for the tweet of Ashwin were from his fans and were about a issue on “Ashwin blocking his fans”. “Blocking all the fans who genuinely wanted him to do well in his career and aprm vanthu my people aahm. How did I even like him😑” read a follower’s comment whereas another one said “Anna, don’t know if you’re personally handling your accounts, but your genuine fans have been blocked by you and it really hurts, kindly look into it anna💙”

Athavathu.. neenga yarellam blck panalaiyo avangalam ur people.. mathavan lam thakkali thokku..😅 naishh.. u made us to break our forever promises done for u.. and we are guilt tripping daily..happy la ipo..😐 you’ll regret for this!! Anyways best wishes for ur future.. gd bye https://t.co/0uXXVM3o98

Ok not holding it anymore!!@i_amak its not the time for boasting about your fans who still believes you its about the genuine souls emotions🙂

Please look into that blocking issue!!if its not intentional! https://t.co/cRJ3pWiPKQ

Anna, don’t know if you’re personally handling your accounts, but your genuine fans have been blocked by you and it really hurts, kindly look into it anna💙 https://t.co/oK2VzFRAiF

Wowwwwwww how kind of you Ashwin to simply ignore those who genuinely supported you.
Feels so good right now, Thank you!🙂 https://t.co/X6GddUrHZ0

I hope you are aware that most of “your voice”,”your hope”,”your people” are BLOCKED🙃!

IF this tweet of urs was intended to make us forget that issue, then im sorry this is once again WRONG!

And IF you, in case are still not aware of this issue, solve it asap🙃! https://t.co/b8q34Q5dLH

I have been laughing hard for 5 min at your urrutu 🤣🤣please adikadi intha mari tweet podunga 😘adhepdi blocked geniune fans who supported you and pulling stunts without proper clarification 🤢 https://t.co/5u99xVnGWe

So u have blocked people wantedly & checking d tweets of them asking explanation still saying unblocked arey people. Even biggest star Doesn’t have this attitude mark it @i_amak ur countdown starts #Ashwinkumar https://t.co/MlnfEAUvD9

He is clever & Done a perfect move! Indirectly saying if u Support him u shud Support only him then u will be his people if not block! Raanuvathula alinjavana vida aanavathula alinjavan than jaasthi. Wait & watch Manna #Ashwinkumar https://t.co/MlnfEAUvD9 pic.twitter.com/yViWUEsYHG

Have soo much to vent but nee laa thirundamatta you will face big for hurting the ones who loved you wholeheartedly ungratefullness in adaiyalamey 🤡🤡 https://t.co/5u99xVnGWe

Earlier, Ashwin caught into controversy for a speech he delivered in his debut movie’s audio launch. The comment made by the actor about dozing off while hearing scripts that he doesn’t like, landed him in huge trouble. Netizens made memes and trolls until the aspiring actor released a video apologizing for his speech in the audio launch.

After his speech became a subject to severe trolls and memes, Ashwin released a video saying that the incident made a huge impact in him. The “CWC” fame also apologized for his speech.

Chief minister Edappadi K Palaniswami who addressed the press earlier regarding the state's situation in combating COVID 19, has posted a tweet warning miscreants...

“Thalapathy Vijay Pushed Me To Do Rajini Project” – Nelson Dilipkumar

Nelson Dilipkumar, in his recent interview with Ananda Vikatan, revealed that actor Vijay boosted his confidence in narrating script to Superstar Rajinikanth. It was...