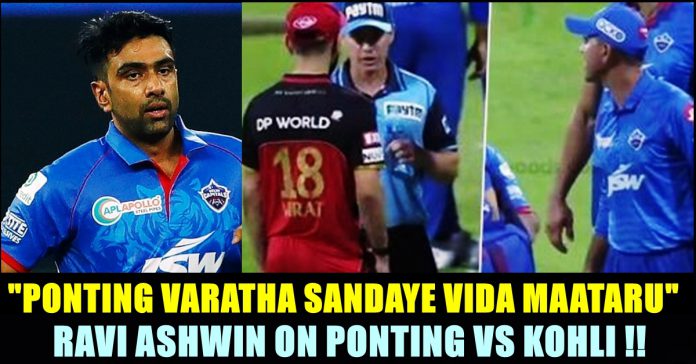 Ravichandran Ashwin of Delhi Capitals confirmed that a heated argument took place between former Australian captain Ricky Ponting and Current Indian captain Virat Kohli during the second league match of Delhi Capitals vs Royal Challengers Bangalore. In his newly launched Youtube channel, the cricketer who revealed why the rift took place between the duo, made it clear that such incidents are usual during such crucial games.

During the match, Ricky Ponting, coach of Delhi capitals, was out on the field when umpires announced the strategic timeout. At that time, Virat Kohli was batting for Royal Challengers Bangalore. All of a sudden, an argument took place between Ricky Ponting and Virat Kohli. It was widely believed that Ponting was defending the decision of his team not having Ravichandran Ashwin on the field.

Now, after the tournament successfully got completed, the off spinner opened on the issue while answering to one of his channel’s follower. While fans were speculating about many other reasons all these days, Ravi revealed that the main person who caused the verbal spat between his coach and his Indian team captain is no one but himself.

“Due to the hamstring injury that occured in my back while I was running, I suffered severe pain. They took MRI scan for three long hours and it was traced to a nerve pull to back. I went off the field after bowling. However, the opposition thought that I went in after bowling without a reason. And we all know about Ricky, he wouldn’t leg go off a fight that easy. So when RCB questioned about my absence, he furiously confronted them saying that I went inside only due to injury” said Ravichandran Ashwin in the video.

Watch the video below from 49th minute :

Apart from this, Ashwin shared about many incidents regarding his experience during the IPL tournament. the Chennai based cricketer revealed how much he loves bowling for a batsman like Kohli. “He would never take chances against me and play with extra awareness. It is a matter of pride for him. Even, Dhoni is also like that. In 2016, while I was playing for Pune, I bowled him a ball outside off and he tried for a maximum. But it went high in the air but unfortunately Ankita Sharma dropped the catch which left me extremely dejected” said Ash who went on to share his joy to picking Virat’s wicket in IPL 2020.

“Since then, people always said that I haven’t taken a wicket of Kohli. As I have took his wicket now, it was a pleasing moment for me and I feel that I have justified myself to me” Ashwin said. Watch the video below :

The off spinner performed extremely well throughout the tournament for Delhi capitals. Now, he is all set to represent team India under Virat Kohli’s captaincy in the upcoming Australia test series.