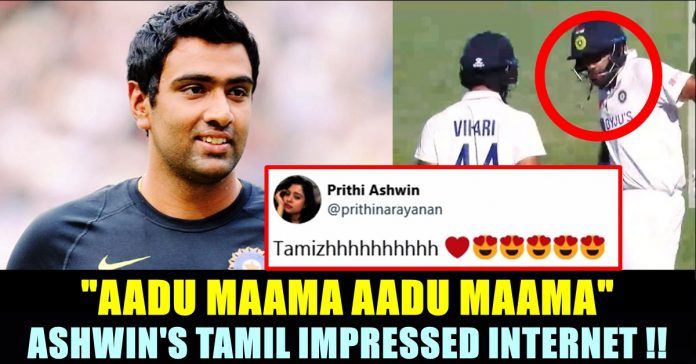 Ravichandran Ashwin and Hanuma Vihari’s heroic defensive batting prevented Team India from facing a loss against Australia in the third test against them at the Sydney cricket ground. The duo has made a 62 runs from 259 balls and showed character which awed the fans of Indian cricket team. To our surprise, Ashwin communicates to Vihari in Tamil language throughout their partnership and the former’s wife reacted to it in her official twitter account.

Australia declared at 312 for 6, setting India target of 407 runs to win. Chasing such a huge target, Rohit Sharma and Shubman Gill gave India a decent start. While everyone wanted team India to play for a draw, Pant’s terrific innings of 98 runs from 113 balls gave the side to have a hope for the win. His partnership with Pujara helped team India to reach 300 plus runs whereas experts such as Ricky Ponting thought Australian bowlers will restrict the Indian batting line up within 200 runs.

In this test match which saw drama and animated gestures from the players, Ravichandran Ashwin surprised fans by communicating with Hanuma Vihari in Tamil language. According to Prithi Ashwin, her husband said “aadu mama aadu mama” to the Andhra Pradesh based cricketer.

“My mind is playing tricks. I thought I heard “aadu mama aadu mama” between Ash and Vihari now.” said Prithi in one of her tweets and wrote “Tamizhhhhhhhhhh” by adding heart in the eyes emoji.

My mind is playing tricks. I thought I heard “aadu mama aadu mama” between Ash and Vihari now.

The duo played together for almost four hours. During 122nd over, Ashwin could be heard saying to Vihari that they have to play just 10 balls each to get it under 40.

In another occasion, Ashwin instructs Vihari that the ball won’t come to him straight.

Another one. #INDvAUS #Ashwin #vihari pic.twitter.com/WIqvbPSBkt

Check out how Internet has been reacting for this :

That’s Tamil you keep hearing on the stump mike, in case the #HindiImposition crowd is wondering. In case you ever had a doubt that this country was about the one language #AUSvIND

Loving Ashwin’s bilingual performance here. Giving it back to Paine in English and mentoring Vihari in Tamil.
Multi-tasking of the highest level while saving a Test. @ashwinravi99 #AUSvIND

Amazing attitude and resilience shown by @ashwinravi99 & @Hanumavihari ,With those pep talk in Tamil by Ashwin to Vihari aad mama(keep playing mate) @ashwinravi99 showing how mentally strong he is in all the skills. On to Brisbane #AUSvsIND

Ashwin’s tamil is the only thing that could make this match even more beautiful and memorable.

Looks like many didn’t watch Ashwin and Vihari chat on Instagram Live. For most parts, Ashwin was talking to him Tamil

Lovely to hear Ashwin encouraging Vihari to play straight on in chaste Tamil.

Ashwin said something to Vihari in Tamil and I commented, “Oh, is Vihari Tam? How come he understands Tamil?”
Dad said, “Vihari has been standing with Ashwin for over three hours now. Must’ve learnt the language”#INDvAUS