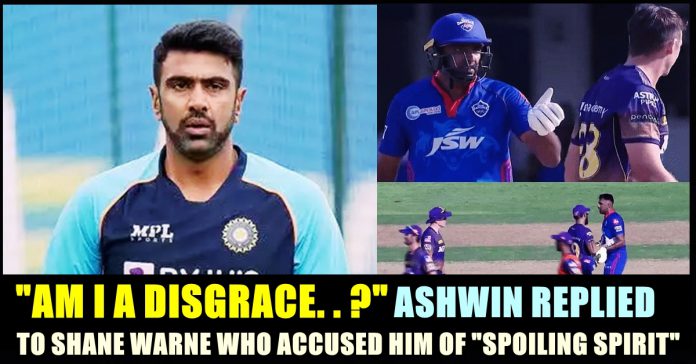 Team India’s prominent off spinner who reprsents Delhi Capitals in the ongoing IPL tournament, came up with a series of tweets, clarifying about what really happened between himself, Tim Southee and Eoin Morgan during his team’s match against Kolkata Knight Riders. The Tamil nadu cricketer said that he didn’t know that the ball had really hid Rishabh Pant and also added that he would have ran even if he saw the same because he was allowed. The cricketer also explained what he really thinks as the “spirit of the game” through his tweets which is going viral among the fans of game cricket.

In the match that took place between Delhi Capitals and Kolkata Knight Riders on Tuesday, a verbal spat took place between ace spinner Ravichandran Ashwin and England Captain Eoin Morgan. over Ashwin trying to get the second run after the ball hit the pads of his partner Rishabh Pant. Initially Ashwin had a conversation with bowler Tim Southee and the conversation turned argument after Eoin Morgan intervened to exchange words with the Chennai born spinner.

“At the moment, I am happy that I played peacemaker and things have come to a good standstill right now” Karthick said in a virtual press conference. Later the match, when Morgan came in to bat, Ashwin got him out for a duck and celebrated the wicket in an aggressive manner. The incident caused various kind of reactions from the viewers. Veteran spinner Shane warne accused Ashwin of spoiling the spirit of the game. “It’s pretty simple – it’s disgraceful & should never happen. Why does Ashwin have to be that guy again ? I think Eoin Morgan had every right to nail him !!!!” he said in his tweet.

The world shouldn’t be divided on this topic and Ashwin. It’s pretty simple – it’s disgraceful & should never happen. Why does Ashwin have to be that guy again ? I think @Eoin16 had every right to nail him !!!! https://t.co/C2g5wYjeT6

In a way of replying to Shane Warne and all the others, Ashwin came up with a series of tweets in his official twitter handle, explaining about his point of view of the issue. The cricketer said that he didn’t know that the ball had hit Rishabh and added that he would have ran even if he saw it. Ashwin revealed that Morgan called him as a “Disgrace” and said that he is not one.

The spinner also said that he didn’t fight but stood up for himself which his parents and teachers taught him. He further added that Southee and Morgan can stand for what they believe but have no rights to use derogatory language. “There are millions of cricketers with several thought processes that play this great game to make it their careers, teach them that an extra run taken due to a poor throw aimed to get you out can make your career and an extra yard stolen by the non striker can break your career. Do not confuse them by telling them that you will be termed a good person if you refuse the run or warn the non striker, because all these people who are terming you good or bad have already made a living or they are doing what it takes to be successful elsewhere.” Ashwin’s reply to seniors like Shane warne who criticized read.

4. Did I fight?
No, I stood up for myself and that’s what my teachers and parents taught me to do and pls teach your children to stand up for themselves.
In Morgan or Southee’s world of cricket they can choose and stick to what they believe is right or wrong but do not have the

There are millions of cricketers with several thought processes that play this great game to make it their careers, teach them that an extra run taken due to a poor throw aimed to get you out can make your career and an extra yard stolen by the non striker can break your career

Give your heart and soul on the field and play within the rules of the game and shake your hands once the game is over.

The above is the only ‘spirit of the game’ I understand.

On Wednesday, former Indian captain Mahendra Singh Dhoni turns 40 and is receiving wishes from across the country. Several cinema celebrities, players of Indian...